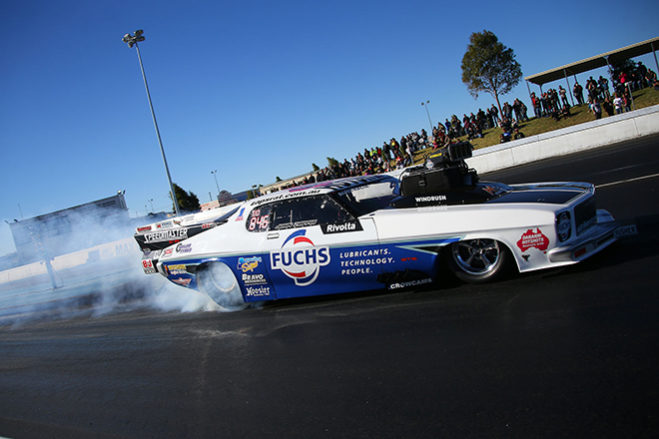 Nine-time Champion John Zappia has top qualified for the Desert Nationals today at Alice Springs Inland Dragway, in what is the first ever visit to the venue by any Group One category.…

Nine-time Champion John Zappia has top qualified for the Desert Nationals today at Alice Springs Inland Dragway, in what is the first ever visit to the venue by any Group One category.

Qualifying is now complete for the professional-level bracket, with eliminations racing to commence tomorrow (Sunday 17 July) from 12.30pm (on-track action kicks-off at 10.30am). For a full list of qualifying results from today’s action, please click here.

“We are of course very happy with the result,” said Zappia.

“We are looking good at the moment, the Fuchs Monaro is strong, and I think as the track gets better with a bit more rubber on it, it will just get better and better as the weekend goes by.

“For tomorrow, we will just keep it all the same at this stage – we will face the number eight qualifier in the first round so we will leave the set up the same and just maybe fine-tune a couple of things and send it. We will then fine-tune across the day as we need to, depending on who we are coming up against, what lane we have and that kind of thing.”

While the West Australian may have topped the sheets, local racer Andrew Sutton and ‘Mad Professor’ Rob Taylor gave the fans plenty to gasp about with a two-car incident during the very first Top Doorslammer pass of the day. 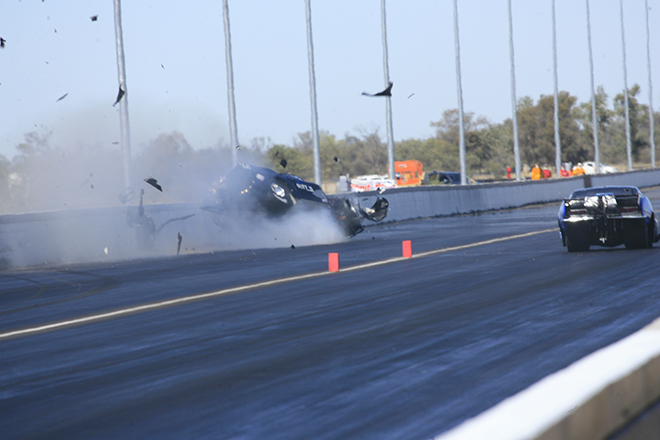 Sutton got crossed up after the start and hit the left hand wall before travelling across the track in-front of Taylor, who then ‘spun out’ avoiding the wayward Corvette and as a result, tagged the wall. The incident saw the rest of that session of qualifying cancelled due to clean-up time and the need for more heat and rubber on the track surface.

Both drivers were thankfully unhurt but neither will contest tomorrow’s racing. They will be joined on the sidelines by fellow non-qualifiers Bill Goonan and Gary Phillips. Goonan missed out on the field by just 0.03 of a second, while Phillips was a shock non-qualifier after taking out the Nitro Up North Top Doorslammer victory at Hidden Valley Drag Strip just last weekend.

“It is horrible to see people crash and that can make you scared to go out there, but once we got the first run out of the way it wasn’t too bad,” said Zappia.

“I think after the crash, everyone had backed their cars down a bit. We went alright on the first one and so we said let’s leave it alone and try and do the same in the left lane.

“It actually left about the same at the 60 foot but it rattled and I pedalled it, I recovered a bit quicker so it was a quicker run to the 330ft mark, but it got a bit sideways after that so I got it off early. I was about 21mph down on the first run, but it still went 4.10s – I was pretty surprised by that time, and it meant we had the two quickest passes of the day, one in each lane.”

As well as being the first time the venue has hosted group one racing, this weekend has also been the first time national categories have raced the quarter-mile distance in Alice Springs following recent upgrades put in place by the NT government and Chief Minister Adam Giles.

While Top Doorslammer – along with Super Comp, Top Sportsman, Modified and Supercharged Outlaws – joined the Summit Racing Equipment Junior Dragster competitors in running to the eighth-mile distance in a last-minute change due to the cold desert conditions; Super Sedan, Modified Bike and Super Street all competed across the quarter-mile.

It is also the first time that nitro has come to Alice Springs Inland Dragway, with Matt Abel (Outlaw Nitro Funny Car) undertaking exhibition runs to the delight of the crowd and Top Fuel Motorcycle Champion Chris Porter joining him on Sunday.

On-track action commences tomorrow morning from 10.30am before racing for all categories commences from 12.30pm. Also on the schedule are racing for the Summit Racing Equipment Sportsman Series and further Top Fuel Motorcycle and Outlaw Nitro Funny Car exhibition passes.