John Zappia – A Decade of Thrills and Championships

John Zappia – A Decade of Thrills and Championships 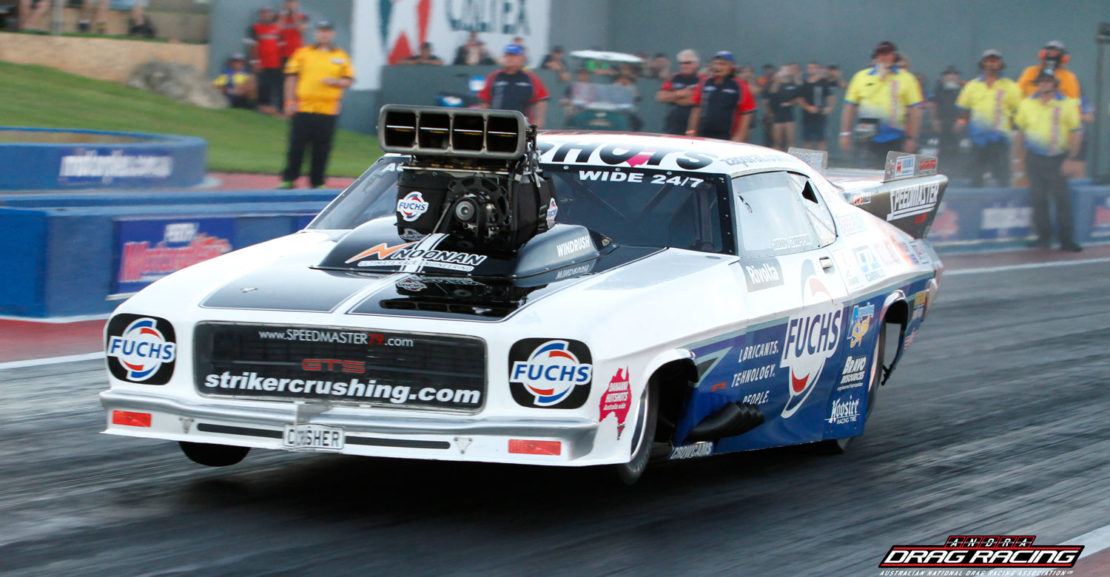 John Zappia claimed an unprecedented tenth ANDRA Top Doorslammer Series title with his Fuchs Holden Monaro on Sunday at Perth Motorplex’s Westernationals, adding to his record of dominance in one of Australian drag racing’s most competitive categories – and winning the Westernationals on his home tu…

John Zappia claimed an unprecedented tenth ANDRA Top Doorslammer Series title with his Fuchs Holden Monaro on Sunday at Perth Motorplex's Westernationals, adding to his record of dominance in one of Australian drag racing's most competitive categories - and winning the Westernationals on his home turf was an added bonus.

After qualifying in top position with a 5.74, Zappia knew he had a good shot at wrapping up the championship during Sunday’s eliminations if points rival Mark Belleri went out early in the ACDelco Monaro. But when news came through that Belleri had hurt an engine and would not make it to round one, the championship was done and dusted much earlier than thought.

“To wrap up the title with one event remaining is a real accomplishment for the Fuchs team and ten straight championships feels great,” Zappia said. “It is good for my crew, my sponsors, all the people who help us do what we do and contribute in any way.”

Putting his number of titles into double digits was definitely on Zappia’s mind, right from the start of the season. 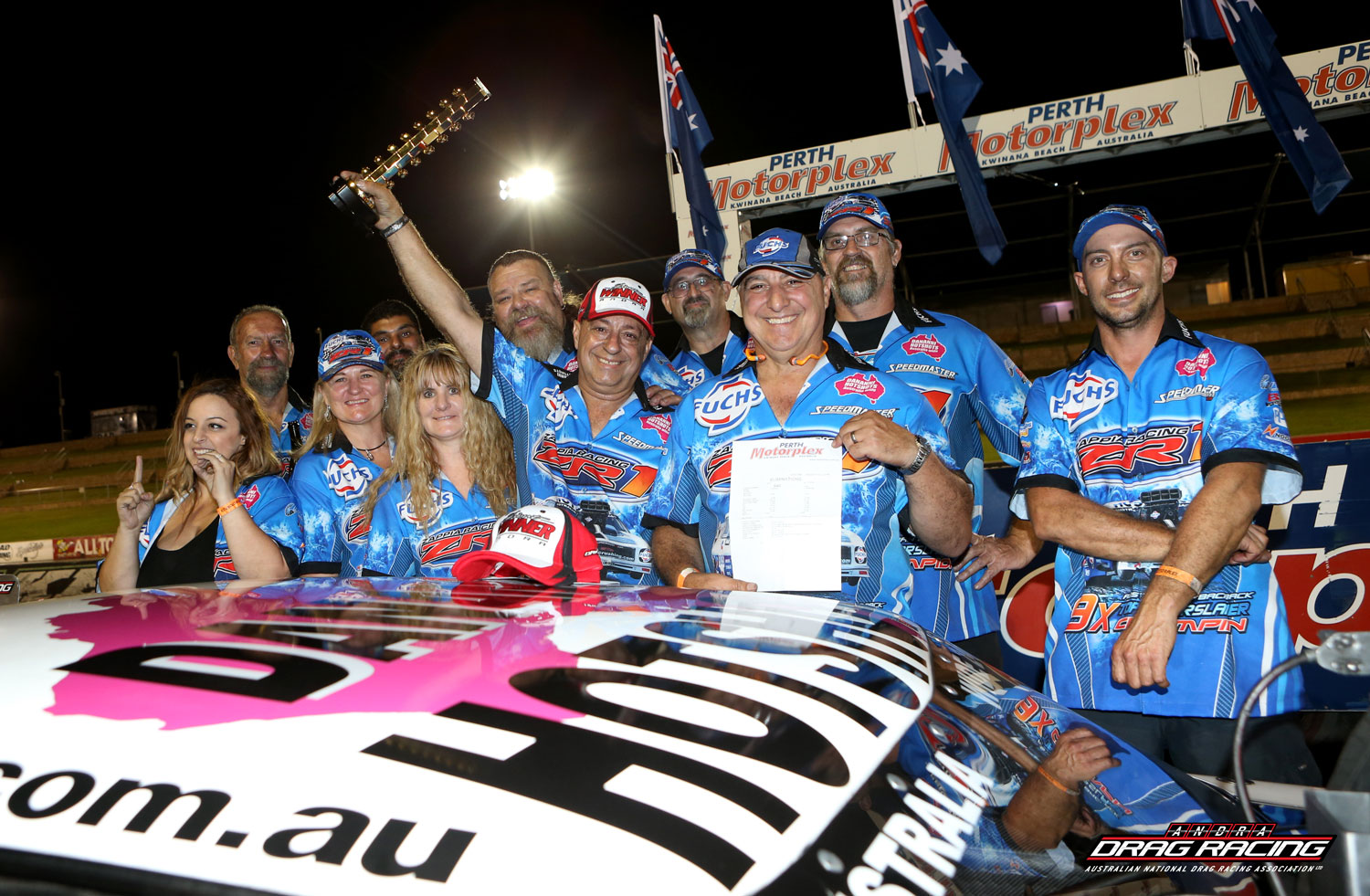 “There has been a lot of events on this season in the ANDRA Top Doorslammer and 400 Thunder Pro Slammer series. We were focused on the ANDRA championship because we were after those ten in a row and we didn’t want to spread ourselves too thin. It was too big of a milestone not to concentrate on.”

The Westernationals was an unusually tropical weekend for Perth, with high heat and humidity at a venue normally renowned for excellent air conditions.

“It was one of the hottest, most humid weekends we have ever raced at. The air started around 4000 feet with 85% humidity and it dropped a little bit over the day but was still pretty bad.

“We went out with the 5.71 tune up from the Goldenstates for the first pass in qualifying but we knew we really should have backed it off, and sure enough it rattled hard and bounced the back wheels clean off the ground. I pedalled and went 5.98 to put us in third spot after the first session.

“For the second session we put a different set of Hoosier tyres on and backed the clutch off a little bit and sent it out there and went 5.74 at 251mph. It went a little bit to the right and used up a bit of the track but it was fast and surprised us for the weather conditions.”

One thing contributing to the pace might have been a little bit of weight loss thanks to adopting Speedflow’s new light weight crimped hoses.

“Before the event we replaced all the hoses on the car which lightened it by four pounds and they worked a treat,” Zappia said.

The third session was postponed to Sunday morning due to oildowns taking the track to curfew. Zappia elected to sit the session out, with improvement unlikely on the warm track.

“We decided to sit on the 5.74 and do our maintenance ready for eliminations. It was warm out there but it wasn’t too bad and Scotty MacLean got in the show with a 5.87, bumping out Kelvin Lyle.”

As well as doing his own maintenance, Zappia was helping Lyle (Top Doorslammer) and Russell Taylor (Top Alcohol) with their tune ups too. When the news came through about Belleri withdrawing, Lyle was back into the field and had a first round confrontation with the Fuchs Monaro.

“I worked with Kelvin and looked at the data and put a tune up in to get him into the fives for the 7.30 shootout for non-qualifiers. Then after that we had a phone call saying Belleri had pulled out and Kelvin was in. I talked to Kelvin and said he was running me and was he happy with the changes, did he want to throw more at it and try and beat me? He said he was happy with what we had given him.”

Neither racer took it easy in the first round. Lyle got the jump with an excellent .040 reaction time to Zappia’s .073 and it took all of Zappia’s 5.77 to get around a personal best 6.000 from Lyle, just missing his first five second pass. Zappia’s team was pleased not just with the win but also a new personal best speed of 256.7mph – though it may have had something to do with the long way Zappia took to the finish line.

“The car launched and went to the right and I punched second gear, missing the centre line by four inches. It was a bit too close for comfort!”

The semi final turned into a non-contest when Paul Cannuli had difficulties starting in the Sean Mifsud Duster, Zappia running a 5.79 with a slightly early shut off after he saw something spraying on the windscreen.

With the final round imminent, some last minute changes were made to the suspension to keep the Fuchs Monaro in the centre of the track and stepping up the horsepower to match the improving track, where the final round would see Zappia against Frank Mamone.

“It went to the right a little again but nowhere near as much and we got the win with a 5.72. There is a bit left in the car yet, we had everything on the safe side as we did some engine damage the week before. But we didn’t lose much performance for the gains in reliability, especially considering the weather.”

Zappia will next head to the ANDRA Grand Finals at Adelaide International Raceway, before returning back home for the Motorplex Grand Final.