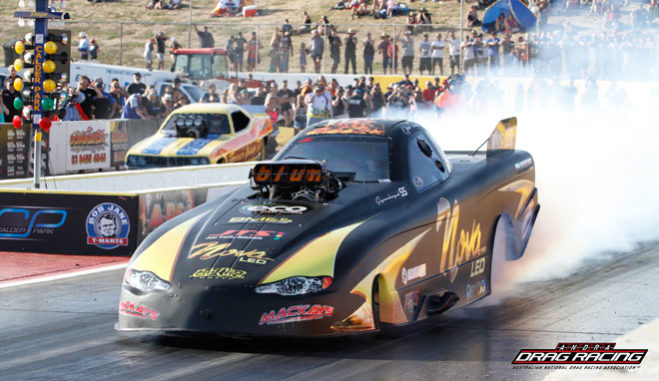 For the Top Alcohol category, the Westernationals will be their second opportunity to gain valuable points in the 2016/17 ANDRA Drag racing Series.…

For the Top Alcohol category, the Westernationals will be their second opportunity to gain valuable points in the 2016/17 ANDRA Drag racing Series.

At the 51st Australian Nationals in January we saw current ANDRA Champion John Cannuli dominate the field in his new Top Alcohol Funny Car. The Queenslander defeated Brian Lockman in the final, and picked up bonus points for setting Low ET and Top Speed.

It was in the Nationals winners’ circle that the current Top Alcohol Funny Car World Record Holder surprised his crew by announcing they were all heading west to contest the Westernationals. “Yeah the crew had no clue what my plans were after the Nationals, so I sprung it on them at Calder”, laughed Cannuli.

“Considering we put this car together in a week I was happy with it’s performance and to have taken the win was great for the crew who put in the late nights to build the car.

“It’s an older chassis and runs a nitro Monte Carlo body, but I think we can still take them on at the Westerns. Those WA boys are tough and when you have the likes of Aaron Deery, Adam Marchant and Craig Clasby, its game on, “said Cannuli.

“It’s a fast track and we’ve had a lot of success at Perth Motorplex. We also love their hard-core drag racing fans and can’t wait to meet them.”