Jim Read to be inducted into ANDRA Hall of Fame

Jim Read to be inducted into ANDRA Hall of Fame 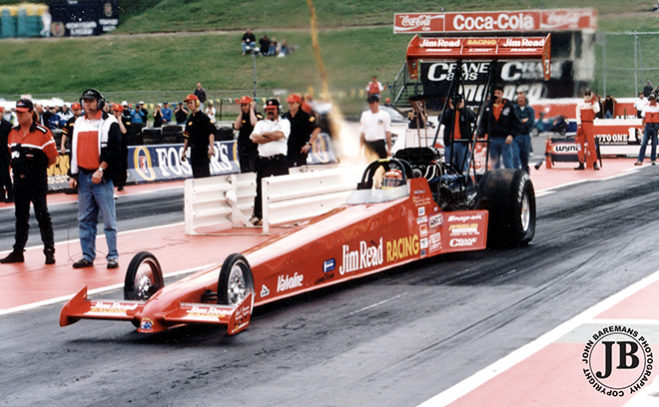 He was the pioneer behind the Winfield Pro Series in the 90s at a time when tobacco sponsorship was a regular fixture in Motorsport, but he was an icon long before that racing Top Fuel, Nitro Funny Car and winning Championships every other year.

Read has been an ANDRA member for over 30 years and served on the ANDRA NSW Divisional Council. He was the first to break the seven, six and five second barriers, he was the first to reach 300 mph, the first and only competitor to win Top Fuel and Nitro Funny Car at the same event and the first Australian to top qualify at an NHRA event.

He has also held positions as President of the NSW Hot Rod Association, General Manager of Castlereagh Dragway, separate stints as CEO and Chairman of Western Sydney International Dragway as it was then known as well as one of the driving forces behind it’s construction.

The list is long and storied and he now adds the ANDRA Hall of Fame to his induction to the International Drag Racing Hall of Fame and the award of the Order of Australia – Australian Sports Medal.

Jim will be overseas at the time of the 2016 ANDRA Championship Dinner but he paid tribute to those who helped make him the drag racer he became.

“There are four people who really made my life in drag racing,” said Read.

“Firstly there is Bruce Phillips, who is no longer with us, the man was a genius and he was originally one of the guys behind Graeme Cowin with Graeme’s first Psycho.

“He introduced me to a gentleman in Parramatta called Burt Jones – Burt Jones Racing Cams. Burt raced a Top Fuel car in latter years called The Vandal that they bought from Ash Marshall with Ross Mellish.

“Burt, Bruce Phillips and Russell Jones who was one of the smartest tuners anywhere – the man won eight Bridge to Bridge races in a row. That’s 60 miles up the river from Hawkesbury, the boats are travelling 110-115 mph and Russell was my crew chief.

“You can never repay these people because remember I’m a plumber. I’m used to using a pair of Stillsons and carrying around tin snips. I didn’t know what a motor was, I didn’t know how to pull a motor apart. I knew none of that stuff, I was taught by these people who I considered geniuses and helped make me what I am.

“And then there’s my little buddy Noel who has been with me 51 years. I never went to a race without Noel.

“There are a lot of people who did good things for me but the most prominent person that I can ever remember – and he was Best Man at my wedding was Ian Kleeman from Rothmans of Pall Mall. Probably the nicest person, if ever I wanted a brother he would have been it, if I had a choice. He was probably the best person for our sport and Jim Read.”

Jim Read will be officially inducted into the ANDRA Drag Racing Hall of Fame at the 2016 ANDRA Championship Dinner on Thursday December 2 at Mawson Lakes Hotel in South Australia.

Accepting the award on the night will be Jim’s sons Bruce and Phil Read.

You can listen to Jim discussing the ANDRA Hall of Fame and his career on the very first episode of the ANDRA Drag Racing Podcast right here.