Maggs hails the Nationals return ahead of Top Alcohol tussle

Maggs hails the Nationals return ahead of Top Alcohol tussle 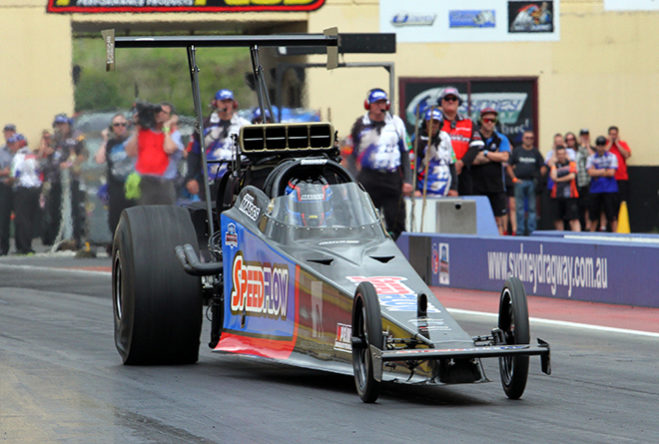 Jason Maggs says the Australian Nationals return to Calder Park Raceway for the first time since 2001 is “a massive step forward for the sport” and he is chomping at the bit to get racing.…

Jason Maggs says the Australian Nationals return to Calder Park Raceway for the first time since 2001 is “a massive step forward for the sport” and he is chomping at the bit to get racing.

Maggs is a three-time winner of the Australian Nationals in Sportsman categories Junior Dragster (1998) and Competition Eliminator (2009, 2011) with his Junior crown coming against his brother at Calder Park way back when.

“Having the Nationals back in its rightful home of Victoria is fantastic!” said Maggs.

“The Nationals has always been a special event. If you have a Nationals Christmas Tree, it takes a special place on the mantle. I know mine do. Everyone always steps up their game that extra bit to try and win it.

“It is a massive step forward for the sport – not only in Victoria, but for the Country.  Melbourne in years gone by was the Drag Racing capital of Australia and hopefully we can get it back there.

“Looking from where I sit, Peter (Pisalidis) and his crew have been working hard to rectify and move on from the problems of the past and get it back on track.

“I certainly commend him and his team for what they have been able to achieve but it is also up to us as drivers and crew – who are in the entertainment business – to put on a good show for those who walk through the gate. If everyone helps and moves in the same direction, things can really move forward.”

Piloting his new Speedflow Top Alcohol Dragster for the first time at the East Coast Nationals in Sydney last November, the event proved to be a great learning experience.

Maggs has had to change his routine in and out of the car as he adjusts from racing Doorslammers to an open wheel Alcohol dragster.

“Running the Dragster is so different to running the Corvette,” said Maggs.

“We have run Doorslammers for so long.  Everyone’s routine within the team, while being similar, is just that little bit different.

“My routine is different, things that used to be my job, are now someone else’s job. Also we have always known that our little engine likes to be up in the rev range and we will be aiding that for the Nationals by changing our rear gear ratio as well as squeezing another gear pack onto our Lenco transmission.

“It should also help me as a driver as I found I was always waiting for the shift light. I’m used to driving cars where the low gears would last for 0.7 seconds.”

With further testing scheduled, Maggs is confident he can master the subtle nuances and reach the five-second zone as he eyes a showdown with Championship leader John Cannuli.

“We were hoping to have new engine combination for the Nationals, but it wasn’t to be, so we’ll come out and have some fun with what we’ve got. So the engine is still as it was in the Corvette.  We feel quite confident that we’ll see a five (second pass) at the Nationals.

“Our Team is really looking forward to this one. I think it’s great that even more new guys are coming into Top Alcohol. Mark (Davison) and myself joining the ranks at the East Coast Nationals and now Chris Hargrave, Craig Russo and Brian Lockman making the jump is fantastic news.

“I reckon John (Cannuli) will have the car to beat, I mean he and his team are a class act, but with the heat and what may be a tricky track surface, anything is possible and we’ll be right there to keep him honest.”