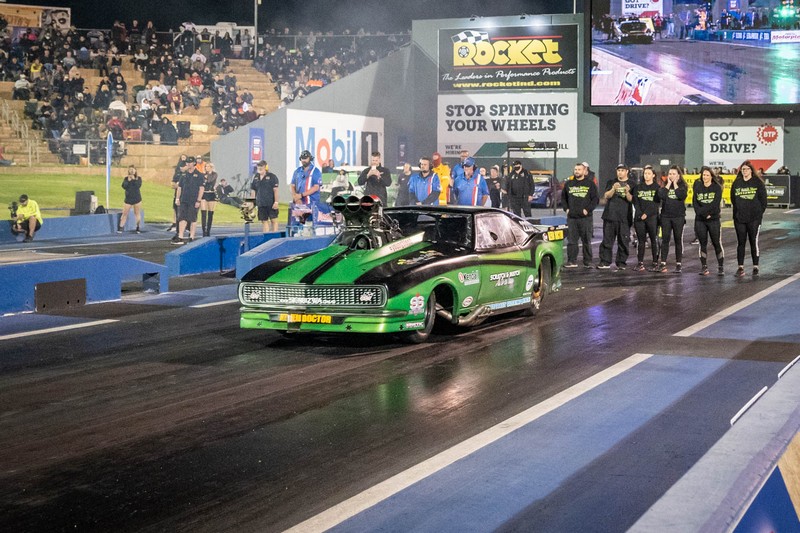 The first season of the new Australian Drag Racing Championship has come to a crowd-pleasing conclusion at the Perth Motorplex, with Daniel Gregorini and Greg Durack claiming the Top Doorslammer and Top Fuel Motorcycle Championships respectively.

Gregorini and Durack headed to the EGT ANDRA Grand Finals in the lead of their title chases ahead of John Zappia and Wayne McGuinness, however it wasn’t until the first rounds of racing were complete for each of them that they were officially heralded as the title winners.

In Top Doorslammer, ten-time ANDRA champion John Zappia was forced to officially concede victory to Gregorini – who also claimed the Crow Cams Australia Top Qualifier Award presented by Decoglaze Glass Splashbacks – when he carried the wheels off the start and scraped the wall in his first-round match-up against eventual event winner Stuart Moresby, who defeated Mark Chapman in the final.

“We are going to have a big celebration! This is a once in a lifetime thing, to stop Zappia’s dominance, this is just huge,” Gregorini beamed.

“We are wrapped, we are so happy, and it is great after nine months since we started in Darwin to finally get the job done. It is a long job to keep going rounds, but it is great to get it done!

“It is definitely very special being the small team in WA, we aren’t running under any major sponsors or working on the car full-time, so we just couldn’t be happier to beat the king of Doorslammer and get our first title.

“Overall, the weekend was good. The rain put a bit of a spanner in the works so we only got the one qualifier on Friday night so we had to make that count, and then there was the second one on Saturday which, being a couple of hours before round one, would have seen things be really hectic if something went wrong. So, once no one knocked us off the top spot we withdrew from that as we didn’t need to do it. Then all was good, we brought it around for the first round and won that, but then in the semis we tried our best, but it was a tricky race track.

In Top Fuel Motorcycle, Greg Durack was confirmed as the title winner when his title rival Ricky Wood was unfortunately unable to contest the first round with issues with his bike seeing it pushed away from the startline, leaving Wayne McGuinness – the winner of the Crow Cams Australia Top Qualifier Award presented by Decoglaze Glass Splashbacks – on a solo pass.

While taking out the title, Durack would miss out on the event win, being dispatched in the semi by a hard-charging Chris Matheson who came agonisingly close to the first five second pass at 6.009 seconds and went on to take the event victory with a solo pass when Wayne McGuiness was unable to front for the final. While he wasn’t able to compete for the event win, McGuinness’ runner-up position plus the all-important points he garnered for being the Top Qualified allowed him to leap-frog Wood for second place by just three points.

“We are really happy with that – we have wrapped up the ADRC and also the WA State Championship tonight, so two out of three ain’t bad!” declared Durack.

“It most definitely is very special; winning championships are always special and they aren’t easy to get of course, they take a lot of hard work and so we are very pleased and very happy to secure another achievement in my journey of drag racing!

“Overall though, this is very pleasing. It is my first Australian Championship in more than 40 years of drag racing motorcycles, so it is very welcome.

“The season has had its ups and downs and I probably didn’t quite get to where I wanted to with a couple of meetings having things not working quite right, but we are over those issues now and the bike is back to where it should be – so now we just have to wait for the next season!

“We are planning on being in Darwin to race, so we are looking forward to that. And from there, whatever will be, will be. I would like to do a lot more travelling; this journey of motorcycle drag racing is not over yet!

It most def is pretty special, winning championships are always and they aren’t easy to get, of course they take a lot of hard work, very pleased and very happy with it. Another achievement in my journey of drag racing!

“Thank you to my brother Jeremey, my sons Cameron and Scott, my wife Kimberly and our sponsors and supporters Clyde Carstairs from Bravo Resources and Dragon Bikes; Gavin Forbes from FME; Grant Bojanjac from Per4manz Turbochargers; and also, Lou Cotter.

“Thanks also to the Perth Motorplex team who have always been great supporters of Top Fuel Motorcycle, to Ray Treasure and his team, and to all of my fellow competitors – I hope to see you in the lanes in the near future!”

Also on-track today at the EGT ANDRA Grand Finals was the competitors for the Summit Racing Equipment Sportsman Series, which also crowned its champions on Saturday evening. For the full details, please click here.

The Burson Auto Parts Australian Top Fuel Championship also contested its third round of its season this weekend, with Damien Harris taking the win over Peter Xiberras.

Further details from the EGT ANDRA Grand Final weekend including national record updates and quotes from more of the winning racers will be released across this coming week.