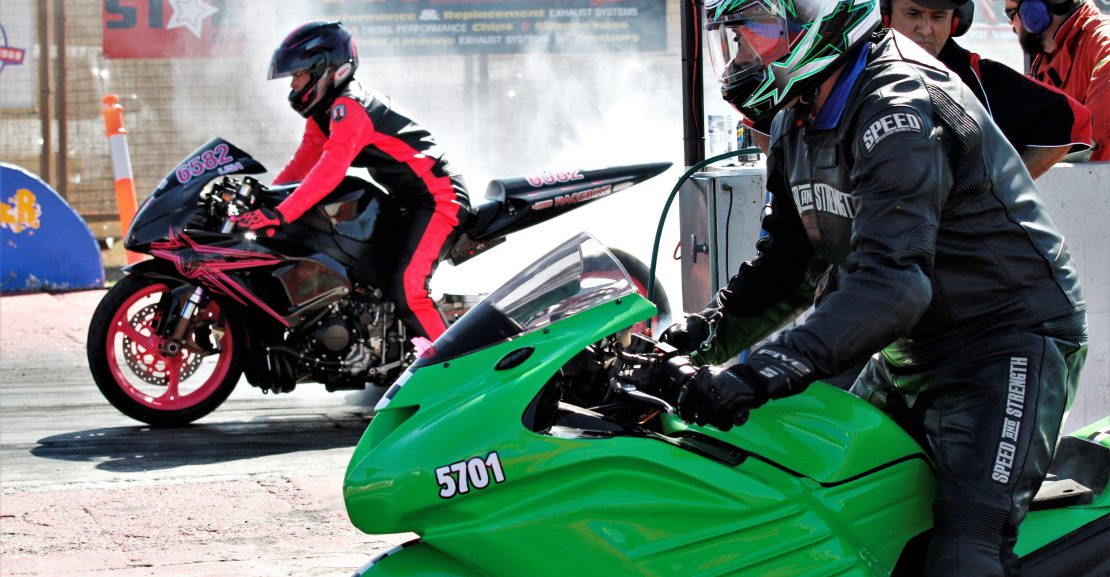 Husband and wife Laeith and Lisa Skinner will travel to Gladstone from their home in Mackay this week to compete in the final round of the 2018 Summit Racing Queensland Championships at Benaraby Raceway (September 22/23).

Laeith took out the Modified Bike victory at the Championships’ last round (held at the Skinners’ home track of Palmrya Dragway) while Lisa was the runner-up at Palmyra Dragway’s recent 50th anniversary event. Each will be looking to continue that momentum this weekend, but above all their aim is to have fun.

“I have learnt to always just go and have fun – if you aim to win you can be disappointed, but if you aim to have fun you always will and a prize or trophy is just a bonus. To me expecting a win isn’t in the spirit of the game,” Laeith said, “but of course it would be nice to bring home the 1 and 2 trophies!”

“We have been doing a lot of work on the bikes earlier this year so we missed round one but it came together in time for us to race four events in four weeks – round two of the Summit Racing Queensland Championships at Palmyra Dragway followed by the Summit Racing Equipment Sportsman Series’ Nitro Up North and Desert Nationals events ahead of Benaraby Raceway’s round 5 of the CDQRA Championships.

“I think it is really fantastic that the tracks are working together so that travelling racers can take in a number of events in something of a once in a lifetime trip.”

When it comes to his wife’s racing, Laeith avoids watching as much as he can, but not for the reason you might think.

“She won’t let me watch!” the 43 year old laughed, “I have to go first as she doesn’t want me watching – we raced against each other last meeting and she beat me, so I am happy to go in front!”

“He watches very closely and when I think I have done something right or wrong he tends to let me know his thoughts on the whole thing, so it is best he goes in front of me and what happens, happens,” laughed Lisa.

“I do watch him when I can though – it doesn’t make me nervous because I am used to the adrenalin and everything, so it is just wanting them to do well and hoping everything goes well in the race. It has been a year of testing different things on the bikes for us so every race is different.”

Lisa’s involvement in racing might have started with her husband, but her love of the sport began well before they met.

“My brother races in Top Sportsman so I had been to the track several times, but yes after we were together it was the age old story where he said he would just take the bike out to test it ‘one time’ and then all of a sudden, the stock standard road bike became our big green ‘taxi’ and it sort of went from there,” Lisa explained.

“I had been watching him have a go and having fun and then Palmyra Dragway put on a Powder Puff bracket and that sort of got me hooked on it, it has been all guns blazing from then even though with us having two small kids, I had had to hold off a little till the youngest was older before I could have a go! I have to thank Laeith for all the work he puts into my bike, trying to get two bikes working sometimes stresses him out and I really appreciate all he does.”

While the year of changes for both bikes has seen plenty for Laeith to work on so far this year, a “perfect” weekend at round two of the Summit Racing Queensland Championships saw it all starting to come together.

“Round two was absolutely spectacular – Palmyra Dragway put on a fantastic event with the grounds in perfect condition, breakfast and dinner BBQs, a big tent for all of the competitors and just a great atmosphere,” said Laeith, who thanks Mackay Kawasaki and Motul Oils for their support.

“On the track it was fantastic as well as I had two perfect runs where I ran dead-on my dial in twice and looking at the day overall I was only a 100th of a second margin off across all six runs of the day. It went really well, and hopefully we can have another great and fun event this weekend.”

Round three of the Summit Racing Queensland Championships will be held at Benaraby Raceway this weekend (September 22-23). For more information, visit www.andra.com.au or https://www.facebook.com/andra.QLD.Champs