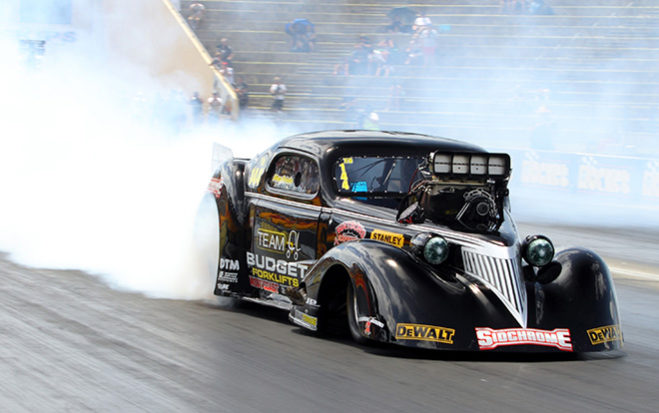 The former Sprintcar driver finished sixth in his first full season of the Australian Top Doorslammer championship including a runner up spot to Stuart Bishop in Perth at the Pro Showdown.

“We were real competitive in the West last year so it was time to hit the road,” said Priolo.

“We had fully covered sponsorship from Watson Transport, could not have done it without Rob and Sandra Watson, they transported my container all the way around Australia by road not rail, and finishing in the top six was great after missing one Sydney round due to my sons wedding.

“It really was a great season, we qualified every round except in Melbourne where we got caught out and just missed the cut at position nine.

“This would have to be one of the most competitive sports in the world. When I raced Sprintcars if the car was not right you carried the car for 25 to 30 laps and got through but in Drag Racing you’ve got that one lap.”

Priolo credited his son Michael and the crew for their success and despite some challenges the team has made great strides forward.

“The start of the Perth season we did a lot of testing and actually went backwards but we went forward a whole lot.

“With the help of Alan Puglia and my son we finally cracked the five second pass we had been knocking on the door for a long time.

“Round one in Perth was good for the Budget Forklifts Team, it just goes to show how competitive it is, we edged out Gary Phillips an icon of the sport who missed the cut even after running a five second pass.

“Then in the first round we had Zap, we rolled through the light. I could not hold the car after breaking a two-dollar bolt in the clutch fork and lost. That sort of stuff happens, but the team left that meeting with our heads up high.”

Just getting into the field is hard enough but given the strides his team has made of late, Priolo is confident they can make the eight and go on a tear in eliminations.

“The Westerns is going to be real tough but I know we are ready to take on the challenge, the team is in good spirits and I never go to a race track not thinking that I cannot win.

“Stopping Zap is going to take a lot of effort, he is a class of his own but he is human and he also can make mistakes, he can be beat!”

The 44th Westernationals begins on Friday January 30 with Sportsman qualifying from 3pm and Group One action from 6pm. The action continues on Saturday January 31 from 9am with Group One eliminations from 6pm.