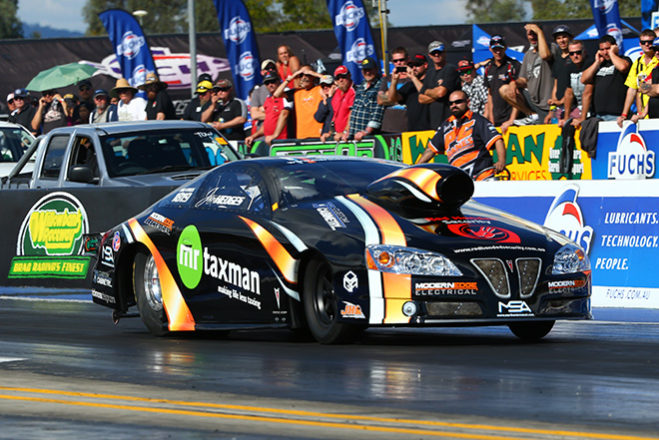 Jason Hedges Racing are once again having their Pro Stock engine program lifted by Tremaniac Racing to be ready for the 2015 ANDRA Pro Stock Season.…

Jason Hedges Racing are once again having their Pro Stock engine program lifted by Tremaniac Racing to be ready for the 2015 ANDRA Pro Stock Season.

Having sat out the previous season due to business commitments, Jason Hedges said his team had been left behind in the power stakes.

“We were hoping to rely on our car tuning skills to get us through the 2014 season and that simply isn’t going to cut it,” said Hedges.

Since joining the Pro Stock ranks, Hedges has teamed up with the Tremaynes and formed a strong relationship on and off the track.

“I will never forget the day I hired Willowbank to license pass in my brand new Stroupe GTO. Aaron made the first burnout and launch, pulled a few gears, popped the chutes, then said ’jump in mate she’s good to go’”.

The end result was four hits, one full pass out the back door, and a stomach full of butterflies.

“As I was collected at the return road by the team, Kerry said to me; ’you just went 7.21, you would have qualified seventh here two weeks ago at the 2009 Winternationals.’

“It was then I knew that Aaron and Kerry had a handle on these Hot Rods. Aaron now builds and develops his own engine program and combining all three skills, driver, car tuner and engine builder, is the complete package required to be successful.

“Four back to back Aussie championships are testament to Aaron’s commitment and skill set.

“There is no better driver in in Australian Pro Stock history with the win stats that Aaron has achieved so far.

“If I could get Aaron to skip a season, to be full time crew chief to all of his customers, the rest of us may have a chance of winning some races,’’ laughed Hedges.

The new JHR TX1 Bullet should be ready to run in November at Sydney Dragway with a bunch of testing beforehand to get a handle on the new power.