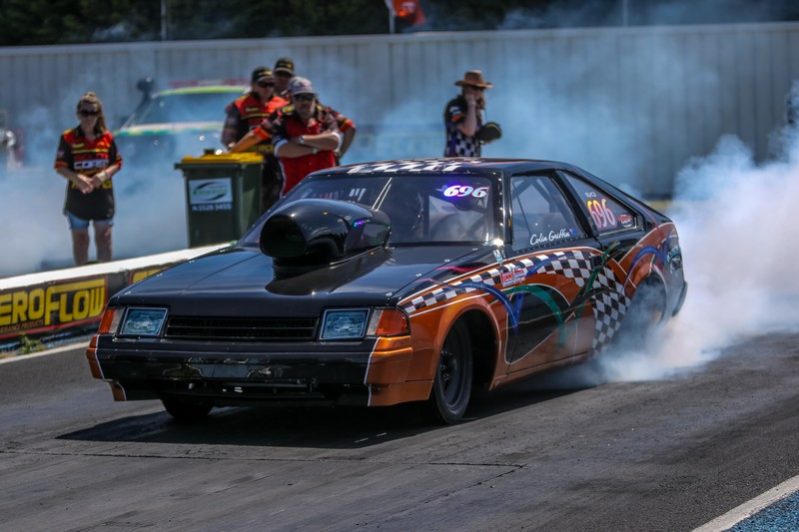 Super Gas racer Colin Griffin is hoping his recent victory at the South Coast 660 is the start of a winning turnaround as he looks ahead to this weekend’s Twilight Nationals (February 15/16).

The event, to be held at the Sunraysia Drag Racing Association’s Sunset Strip in Mildura (Victoria), marks round seven of the 18/19 Summit Racing Equipment Sportsman Series.

“The first couple of events this season were a little hard for me as we wrapped our heads around the fuel change for the bracket, but at the South Coast 660 I think I finally got on top of it!” Griffin explained.

“The car came around and started performing like it should and I was pretty happy with how it all went. It was running well all weekend and didn’t give me any trouble – it sure was a big relief to win as it has been a bit of a dry spell for a little while.

“Every win is special, because in drag racing, you lose way more than you win!” he laughed.

The two-time (1998 and 2017) Super Gas Summit Racing Equipment Sportsman Series Champion is currently third in the points standings with three rounds left to go in the 18/19 championship chase, including this weekend’s Twilight Nationals in Mildura.

“I love going to Mildura, I am not sure how the heat will be but with the twilight racing format hopefully it won’t be too bad and everyone has to deal with the same conditions,” the 56 year old said.

“I am just hoping to do the best I can – I am still in with a chance for the championship, a few things will have to go my way of course but we are going to go and give it our best shot.

“I have won this championship twice before and I would like to win it a third time, but we will just see how we go. If we don’t win, we can always just try again next year.

“My focus first and foremost is on the individual events (rather than the series overall) – for me, I can’t really worry about the ‘championship’, I have to worry about doing well at the events first.”

The fitter and tuner has plenty of experience backing up his approach, having raced in Super Gas since 1994 in the same Toyota Celica he contests now after first starting out in racing in 1987.

“I can run dial-in racing or Super Sedan or Top Sportsman, but I only really want to run in Super Gas – I enjoy the challenge and the bracket has a good bunch of racers; I really enjoy racing in the bracket,” he said, while thanking his wife Anne for all of her support of his racing.

“My car was built in my garage at home for Super Gas 25 years ago and it is all I have ever done and all I want to do.”