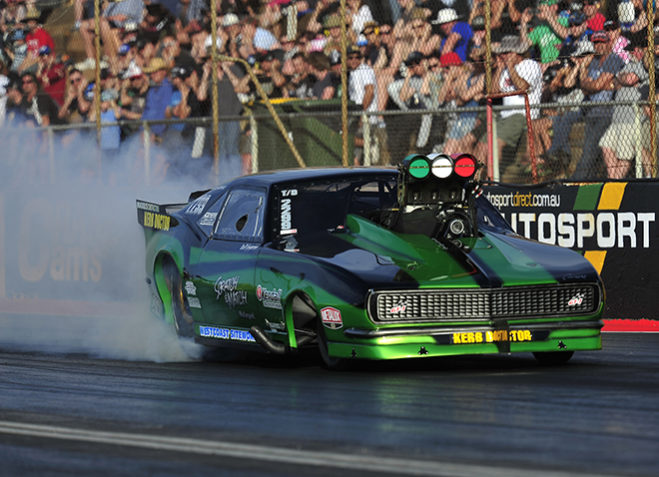 With a shortened six-month ANDRA Drag Racing season to facilitate the change over to a fiscal year calendar, Gregorini is eyeing up all five rounds of the Australian Top Doorslammer Championship as well as his local WA Track Championship.

“We will definitely be running the rounds as it’s a short season as well as contesting in all Perth local rounds to run for our State Championship which runs into April,” he said.

Gregorini has one ANDRA Drag Racing Series win to date coming at the 43rd Westernationals in 2014 and knows displacing seven-time champ John Zappia at the top of the pile is no easy feat.

But when you race against the best every week it puts you in a good position to cause an upset… right?

“John Zappia is the king. To stop his eighth straight title we need to get not one up but two up in the first two rounds but with his current form in Perth all we can hope for is an error or misjudgement from him and his team to allow us or any other team to get a few steps ahead of him. Definitely will be interesting being a short season.

“We have recently converted to the Noonan X1 cylinder heads, just finding our way around them but in the last 15 laps we have knocked out probably 10 laps in the 5.91 – 5.95 range so we are quite happy with our progress.

“We only have the one pair of heads so we can’t afford any errors so it will take longer to fine tune.”

Gregorini will be one of 16 Doorslammers on show at the Home Group WA Nitro Slam event this weekend with more than half the field calling WA home.

“We currently have 15 WA Top Doorslammers, 50 per cent are contenders, 50 per cent are still fine tuning and learning, but with the great race tracks and weather we get given in Perth and plenty of opportunities, we will see better times and harder competition!”