Gregorini the king of speed at Alice Springs

Gregorini the king of speed at Alice Springs 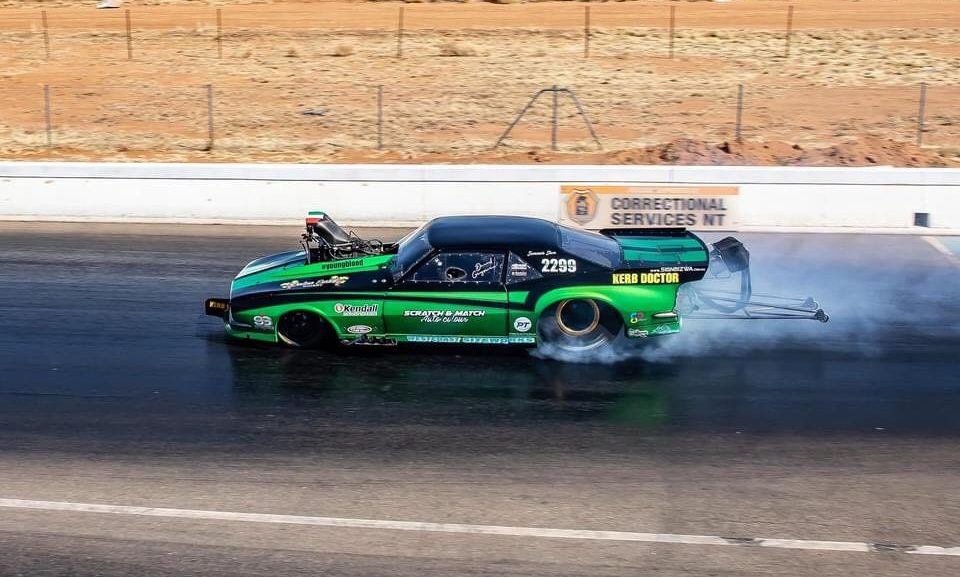 Daniel Gregorini followed up his Top End Nationals Top Doorslammer win with a B Final victory at the Desert Nationals in Alice Springs on Sunday.

Gregorini’s Scratch & Match Motorsport Camaro had plenty of power on tap, with the team also earning bonus points for the top speed of the event, but the trick was applying that to the track. Qualifying saw the team unable to make a clean run, but Gregorini said they were learning more with each pass in preparation for eliminations.

“We always knew Alice was going to be a tricky track for us, so it was important that we got off to a great start in Darwin,” he said.

“Unfortunately our spares simply don’t exist with our budget so we had no ratios to change in the Liberty gearbox and only one converter stator to try and slow the car down. That worked, but with the low car count in Alice due to COVID that made getting rubber down on the perfectly flat Alice Springs Inland Dragway surface hard. I found myself on the back foot and it took all three qualifiers to get enough data to make a clean run.”

Gregorini found himself up against John Zappia for the elimination round, with both teams turning on a spectacular side-by-side race. A slow reaction time from Zappia meant Gregorini had control of the race early, but a 6.097 would not be enough to take down Zappia’s surging 5.886.

“We had some major ignition changes in the car and it was very satisfying to make it down the track. Thanks to the holeshot all we needed was a 6.05 or better, but it wasn’t to be.”

With Zappia moving on to the A Final, it was now up to Gregorini to salvage points in the B Final up against Kelvin Lyle.

“We had lane choice so we opted for the left lane which racers seemed to prefer during the event. This time we were able to lay down a 6.03 at a big speed of 255.36mph. This was another close race as Kelvin was right there with a 6.086.”

Attention now turns to Adelaide International Raceway (AIR), which will host the next round of the Australian Drag Racing Championship for Top Doorslammers. As a 1000 foot event, the pressure will be on racers to be perfect with their reaction times.

“We have been to Adelaide twice in our racing career and I think the Alice Springs tune up we have now will be a great start at AIR. The 1000 feet distance means we can’t make any mistakes, so fingers crossed COVID allows us to make the journey to South Australia in a couple of months.”

While Alice Springs certainly wasn’t a perfect event for the team, Gregorini took heart from his 255mph performance, which was a new track record for speed.

“We set a new ANDRA national record for speed in Darwin, and now we have delivered more big speeds in Alice Springs,” he said.

“You can’t dyno these motors as they make over 3500hp, so speed is the one true indication of power we have. Considering we went 255mph with the amount of altitude Alice Springs has, that is impressive.

Now we need to apply that power earlier in the run and turn on some win lights!”

Zappia took over the championship lead, but the margin is a slim 14 points back to Gregorini. “At this stage of the season we are not too worried about who is in front or behind, and I know Zap is thinking the same way. Things are close and we are sure they will stay close at Adelaide.”

Gregorini passed on his thanks to the great track staff, officials ,volunteers and club members at Alice Springs Inland Dragway.

“Everyone welcomed us from the moment we arrived. The crowd wasn’t massive but they were very loud and appreciative of our efforts. It’s definitely going to be a regular for us to attend from now on.”