Gradden one for one in Championship events

Gradden one for one in Championship events 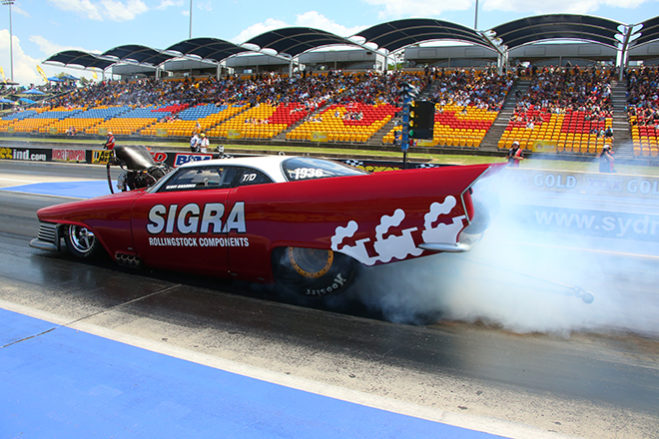 Geoff Gradden qualified for his first Top Doorslammer field at the Australian Nationals over the weekend. He then proceeded to win the entire event.…

Geoff Gradden qualified for his first Top Doorslammer field at the Australian Nationals over the weekend. He then proceeded to win the entire event.

In fact it was top qualifier Kapiris who Gradden defeated first in Round 1 before taking a solo pass in the semi final when John Zappia sustained irreparable damage in his own first round solo run.

Gradden faced Marty Dack in the final and powered to victory when Dack lifted the blower in what was shaping up as a tight finish.

“We’ve been Drag Racing for 10 years, and this, our third and fastest car has been under development for 4 years,” explained team owner and driver Gradden.

“We qualified in the eight car field for the first time on Saturday as the eighth and slowest qualifier.

“On Sunday at elimination rounds, we won against the top qualifier; Peter Kapiris from Victoria, crossing the finish line only seven hundredth’s of a second (0.070 seconds) in front.

“So we completed the quarter mile in 5.96 seconds and crossed the line at 246.71 mph – faster than the car has ever gone before.

“We lined up in the final against Marty Dack from WA and put the car down the track for a 6.03 at 244.21 mph for a comfortable win.

“We knew we had a race car from testing, but needed all aspects of our preparation to come together, along with a few mistakes from other competitors to be able to do well at this national event.

“To go home with the winner’s trophy as a first time qualifier and setting personal best times is more than we could have imagined or dreamed of.”

“It takes the whole team countless hours of preparation, planning and working flat out all weekend to get the car tuned and serviced between rounds,” added Gradden.

“Special thanks also go to Maurice Fabietti and Stuart Rowland for their technical help and advice.”

The race car is a 1959 Chrysler Saratoga built by Sigra and their subcontractors using a host of exotic materials including Chrome Moly steel, Titanium, Aircraft grade aluminium and Carbon Fibre.

Sigra’s Mechatronic engineers collect multi channels of data from every race meeting continually tuning and developing the engine and chassis to make power, develop downforce, traction and get the enormous power to the ground without losing control.