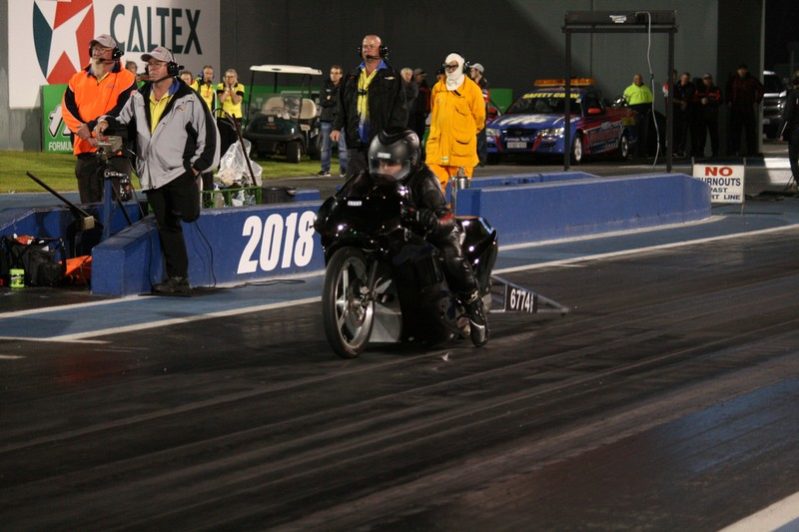 One-day race events are always action-packed from start to finish and the 2018 Goldenstates at the Perth Motorplex was no exception. 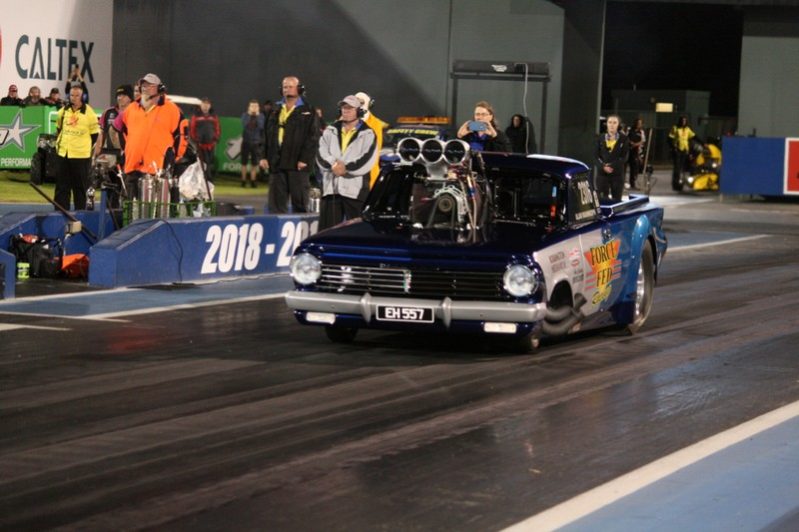 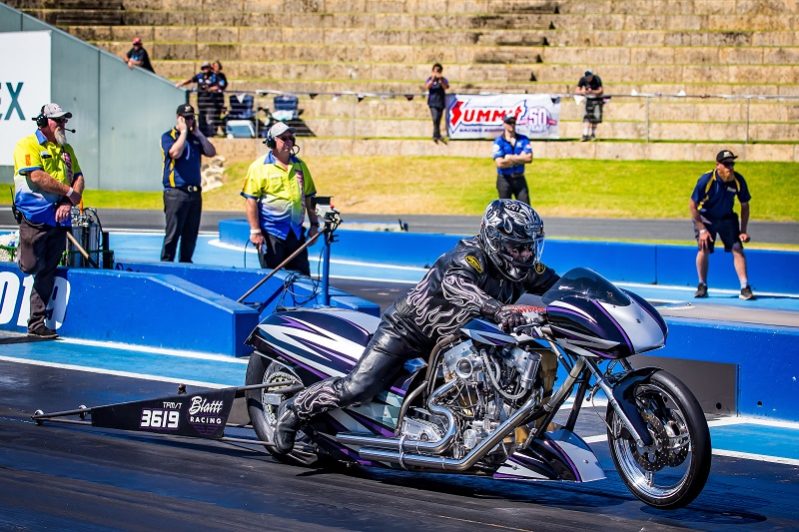 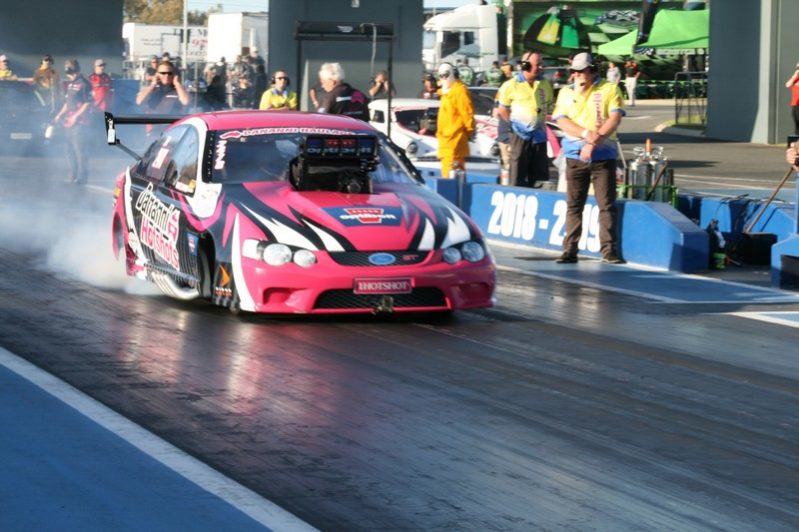 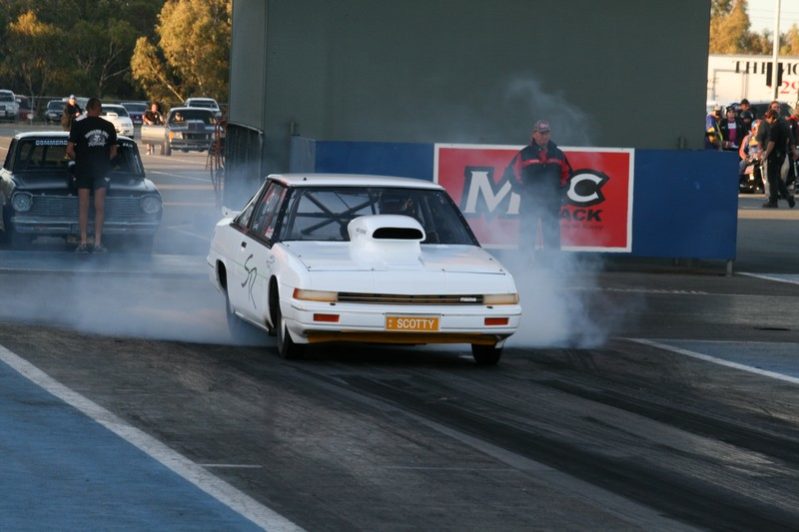 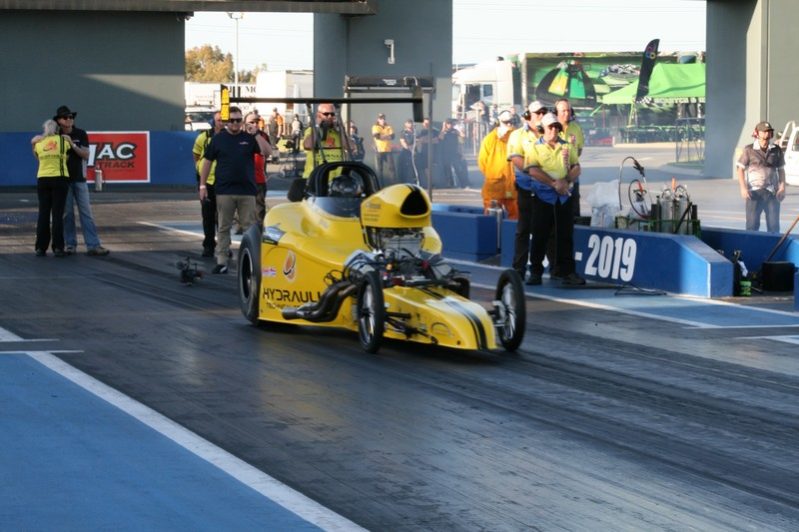 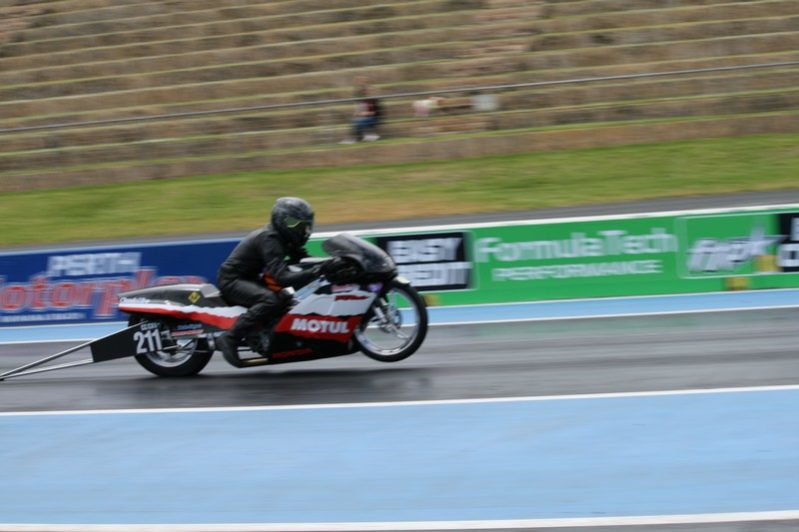 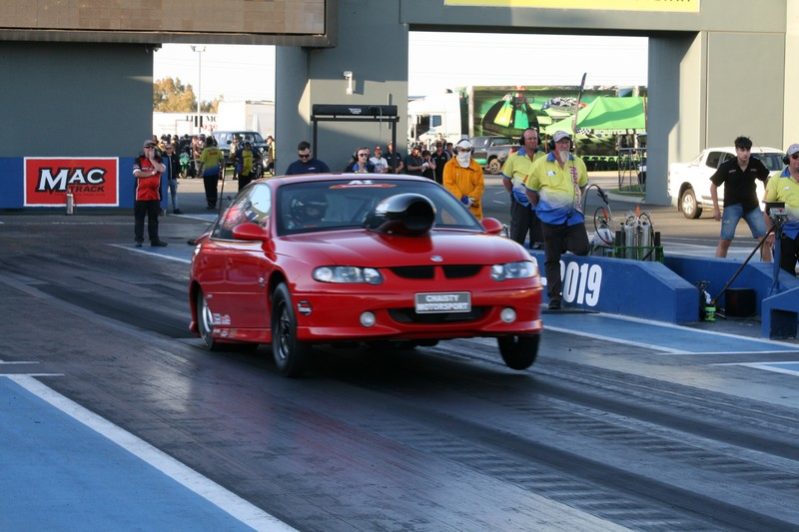 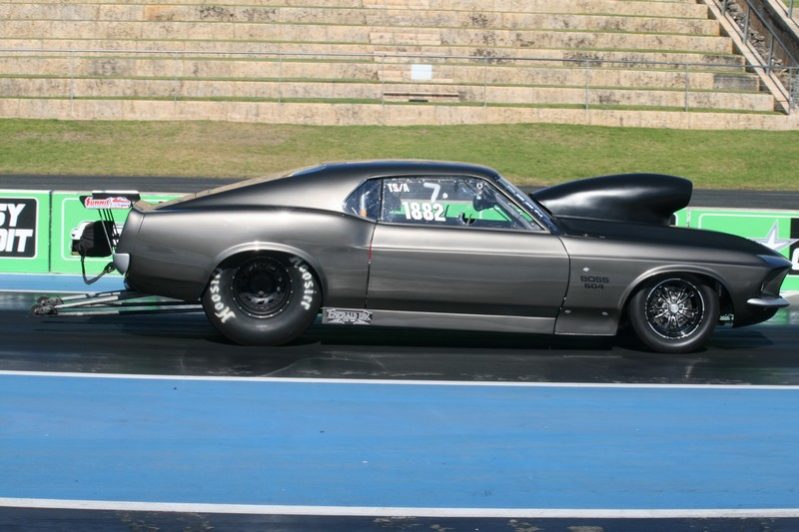 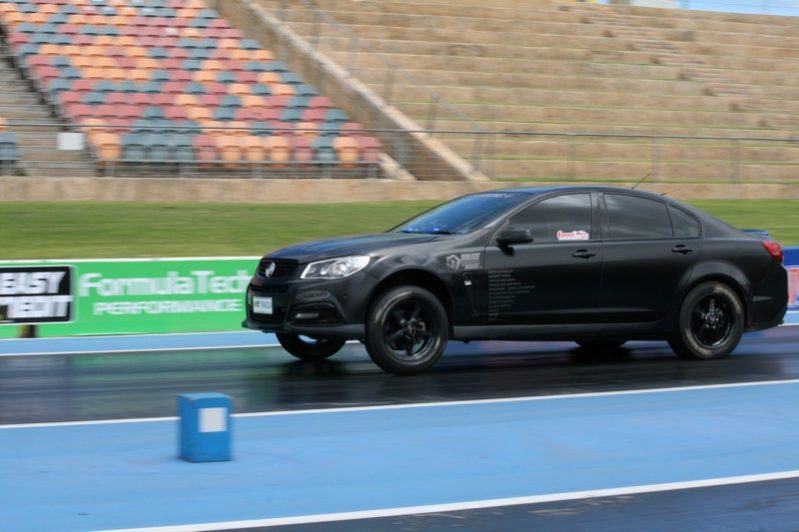 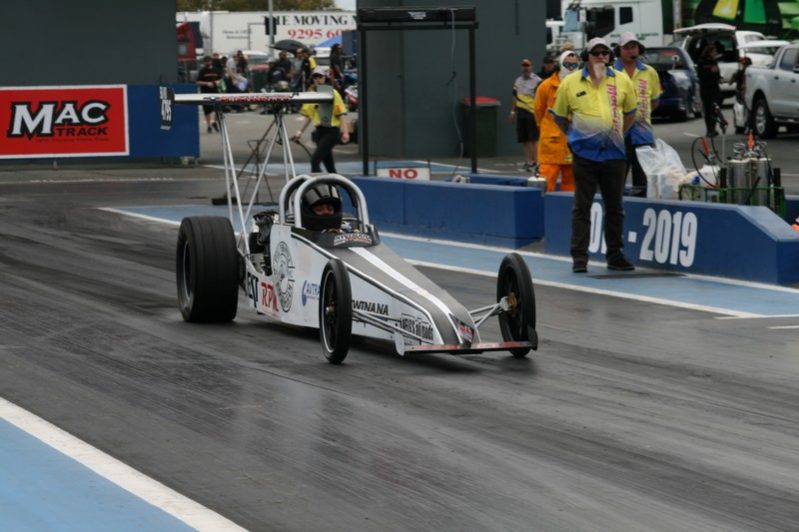 In Modified Bike, Trent Anthony took the win over Gavin Dohnt after having earlier emerged victorious from battle with Chris Moore, Bruce Jones, and Chris Allen (round one) while he enjoyed a bye run in the second round. Dohnt meanwhile had faced off against Paul De Klerk, Chris Fryer and Rob Good. With Anthony having run into trouble with his Suzuki GSXR just days before the event, the victory was a great reward after a frantic few days of repairs.

“At the Test ‘N’ Tune on Wednesday we lost a bolt off of the clutch basket which went through the clutch area and did quite a bit of damage so we didn’t actually think we were going to make it to the Goldenstates,” Anthony explained.

“We ended up pulling the bike down and replacing the clutch and any damaged parts and got it all running again. Then, when we pulled the bike out of the trailer we ran a PB straight up in our first qualifier of 8.494s!

“From there the bike was running well, our times were all pretty much similar and we just didn’t really miss a beat and kept knocking people out to get through to the finals. There wasn’t really many hiccups throughout the day, everything went well.

“I have to thank Auto One in Clarkson and also send big shout outs to my family, my wife Jessica and daughter Ivy Rose, my dad Greg and my mechanic Murray.”

Chris De Bruin took out the Super Street honours over Top Qualifier Lee Watson after having earlier defeated Joel Trotman, John Szabo, Paul McNamara and Denise Downe (round one) while Watson took on Ashleigh Wroe, Darran Bakranich and Richard Stevens (round one) while also enjoying a bye in round two.

Neil Scott took the win in Super Sedan from Matt Gullotto after enjoying a bye to the final and having earlier dispatched Wayne Praetz, Steven Miilias and Nick Benedetto (round one). Gullotto meanwhile had taken race wins from Top Qualifier Mick Fenton, Yvette Gregg, Nick Panagopoulos and Kyle Higgins (round one).

“We had a pretty good day and everything went as planned,” Scott explained.

“We had new tyres on for this meeting as we had a problem with them last meeting. Everything seemed to work as it should and the track was good as is always expected at the Motorplex.

“I would like to thank my wife Tania, Luigi’s Head Shop, S&G Gearbox and Justin from Bye as well as Summit Racing Equipment for their sponsorship of the series and for making parts available through the Summit Racing Pro Shop.”

In the Modified Bracket, Angelo Locantro was able to take out the big trophy from runner-up Mark Grieve after having earlier tasted victory over Top Qualifier Sam Gullotto and Brad Baker (round one) while Grieve enjoyed a bye run to the final after having earlier taken a win from Rhys Naylor. Locantro was another who was faced with major work in the days leading up to the event and was pleased with the pay-off of what was a back-to-back event victory.

“It was a pretty smooth event for us considering we were forced to rebuild the motor this week, everything went pretty well,” Locantro said while thanking Kwinana Performance and Aztrac Mechanical for their support as well as his family and crew.

“We hadn’t planned to rebuild it, we damaged it at the last event (Perth Motorplex season opener) and so we had to fix it if we were going to run at the Goldenstates.

“We always plan for a win but there was some pretty decent competition out there, so we were just concentrating on our own race and it all paid off in the end. The event overall was good and everything ran on time. To go through and pull off a win which is back to back after winning the Motorplex season opener was really good.”

Alan Mahnkoph had a very successful day at the race track, claiming both the Top Qualifier and event victory honours in his ‘Force Fed’ ute. His TQ status saw him enjoy a bye in the first round before taking on Jodie Mellitt in the final. Mellitt meanwhile had faced Darryl Mullins in her opening round.

“We just went through and did our normal thing that we normally do and chipped away, adjusting the tune-up in the car and honing in on our dial-in,” Mahnkoph explained while thanking Alan Erickson Builder, Boddington Mechanical and his crew for their support.

“At the last few meetings we have been chipping away and getting the car more consistent and it is all turning around for us. As far as the Goldenstates, the day was pretty uneventful: the car went from A to B and did what it was supposed to do and we just kept tuning it.

“The track was really good and the Motorplex is always run really well – Ray Treasure does everything he can to bend over backwards to meet the racers’ needs and make the event come in on time.”

In the Top Sportsman ranks, Amanda Martin continued the strong results in her new Chev Cobalt by top qualifying and going all the way to the final, but it was Chris Roe who would take the event victory in his Mustang. Before taking on Martin in the final, Roe had earlier defeated Vlado Turic and Johnny Brecich (round one) while Martin had taken on Paul Downe and Lorenzo Gullotto (round one).

In the Competition bracket, Putland took on and defeated top qualifier Sam Treasure in the final after having earlier raced against Brett Glover. Treasure meanwhile had dispatched Alistair McClure in the opening round.

In the Competition Bike ranks, Justin Townson took the victory over Ross Smith after a frenetic day of racing using the three-round shootout format.

When it came to the Super Stock racing, it was Jake Chaisty who would take the victory over Ralph Lewis after earlier racing Errol Quartermaine and Alex Panagiotidis. Lewis meanwhile enjoyed a bye to his final after having earlier defeated Top Qualifier Todd Stacy in the opening round.

Also impressing at the Goldenstates event was round two of the Perth Motorplex’s Summer Slam and also Nitro Bike racing as well as exhibition runs from Outlaw Nitro Funny Car racers Andrew Katavatis and Matt Abel. In the Summer Slam, Steve Aldridge Top Qualified before Mark Chapman defeated Daniel Gregorini in the B Final and Ryan Moresby defeated Marty Dack in the A Final. In the Nitro Bike proceedings, Jay Upton top qualified before taking the runner-up spot to Wayne McGuinness in the final.

Round six of the 18/19 Summit Racing Equipment Sportsman Series, the South Coast 660, will be held at South Coast Raceway across January 12-13. For more information on that event, please visit www.andra.com.auor www.southcoastraceway.com.au