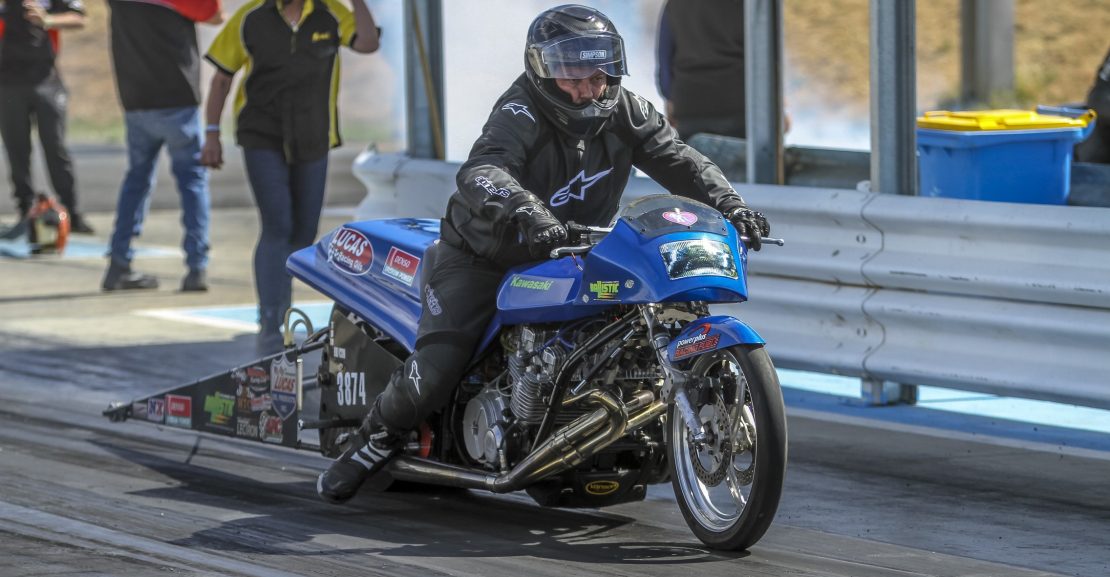 Western Australia’s Craig Gilbert will compete in only his second ever Competition Bike event at the Perth Motorplex’s Goldenstates event this Saturday (December 1).

Armadale’s Gilbert stepped up from the Modified Bike ranks to the nitrous-powered category earlier this year and made his competitive debut at round three of the 18/19 Summit Racing Equipment Sportsman Series (Mildura’s Sunset Strip Nationals in September).

After a miscalculation forced a rebuild on his latest ‘BatAttack’ machine, the maintenance fitter is ready to get back into it at his home track this Saturday for what is round five of the national series.

“After being in Modified Bike for a few years, I stepped up and bought Rob Cassar’s old roller and he built my new motor – we obviously had some teething issues in Mildura, but my first time on NOS was absolutely incredible; I couldn’t stop laughing, I couldn’t stop smiling, it was insane,” Gilbert laughed.

“We had a slight miscalculation and blew a piston and a valve and have just rebuilt it. I will be taking it out at the Test ‘n’ Tune on Wednesday night to test the waters before we get back into racing at the Goldenstates; hopefully we can get to the rest of the meetings across the remainder of the season too.

“It has been awesome to make the step up, it has been a big learning curve on this bike but I hope to get it to the mid ‘sevens’ eventually – that’s a big eventually!” he chuckled, while thanking Rob Cassar and his business Ballistic Racing for all of his assistance and support.

It is no surprise to hear that Gilbert is looking forward to getting back on track, where he will be raising money for a special cause.

“Back in 2011 I rode for Variety – The Children’s Charity as Batman and when I started racing here in Perth I had the Batman stickers on the bike and it has just snowballed from then to now where the team is called BatAttack Racing and I donate my event winnings straight to the Variety kids,” he explained.

“We will also have donation tins at the track, and any kids wanting to have their photo on the BatBike can do so for a gold coin donation. I am also looking forward to giving away a Batman backpack full of Batman goodies to a lucky young race fan at the track on Saturday.

“Every time I race at the Perth Motorplex I know I can look forward to a fantastic track, it is always excellent. Ray Treasure does a fantastic job of organising it all and the volunteers, the firies, the first aiders and all the staff do a great job. It is safe to say I am really looking forward to the Goldenstates.”

Like most racers, the 51 year old has a few special ‘thank yous’ to make for those that support his racing, including one for a very special cheerleader.

“Rob Cassar of course has been such a great help and a wealth of information, so I really have to thank him and Ballistic Racing. I also want to thank some of my crew members, Jude and Emilie Beveridge, they always helps out and are always there for us when I need to get things fixed. I am also very appreciative for the support of Signarama in Midland and Mark at Mack One Kawasaki,” Gilbert said.

“I also have to thank Bella, my cockatiel! She drove all the way to Mildura with me, and she is always on my shoulder while I am working on the bike, even at events. She is always happy to watch and to pass the spanners so to speak!”

Round five of the 18/19 Summit Racing Equipment Sportsman Series, the Goldenstates, will be held at the Perth Motorplex on Saturday December 1. For event information, visit www.motorplex.com.au or www.andra.com.au