Frank Mamone – The Next Chapter

Frank Mamone – The Next Chapter 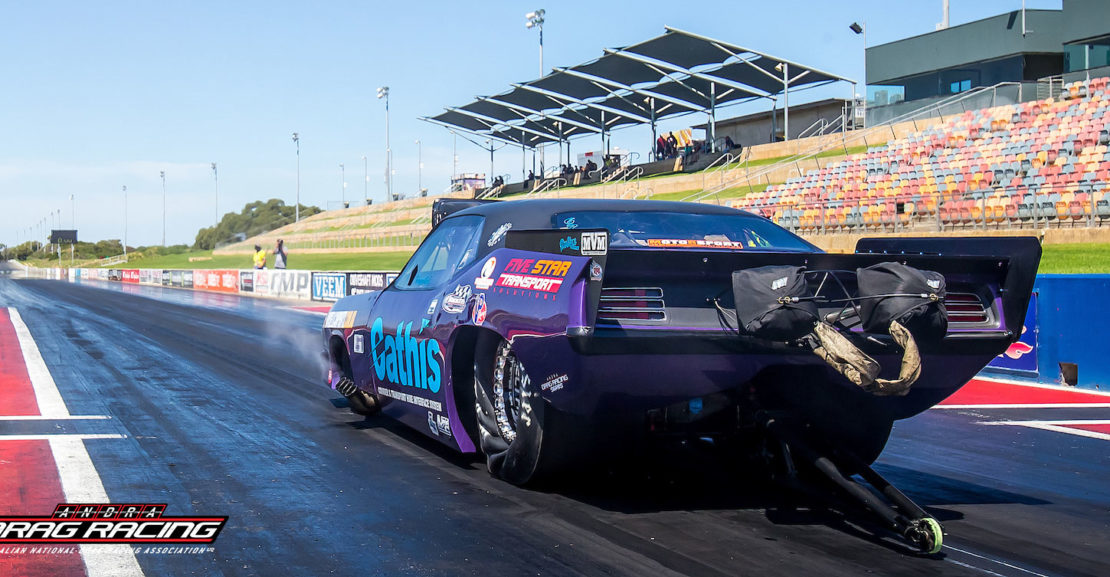 It was a huge weekend for Sydney’s Frank Mamone, going through to the finals of a very tough Top Doorslammer at the 46th Westernationals. However, Mamone and crew went home with an empty trailer when fellow Top Doorslammer racer Steven Aldridge made an offer on the Cuda Mamone couldn’t refuse.…

It was a huge weekend for Sydney’s Frank Mamone, going through to the finals of a very tough Top Doorslammer at the 46th Westernationals.

However, Mamone and crew went home with an empty trailer when fellow Top Doorslammer racer Steven Aldridge made an offer on the Cuda Mamone couldn’t refuse.

Before we move into Mamone’s next chapter, we had a chat about his path from Wednesday testing through to the final round.

“If you asked me about my chances of meeting ten-time champion John Zappia in the finals I would have laughed, “said Mamone. It never entered my headspace. We were just happy to go there and hope that we would make it into the field. Being runner-up is still a winner for us at the end of the day especially when you are up against the likes of John Zappia. Coming second to that bloke is a massive achievement for our whole crew.

“We had a few issues and dramas with testing on Wednesday that we needed to sort out. Not only was it my first time back in the car in some six months, I also had to familiarize myself with the car, the transmission and the sequence involved with the way you apply forward and reverse”, said Mamone.

The Westernationals saw a quite a few brain trusts present in the Top Doorslammer pits. Mamone had Brandon Snider in his corner, a racer who holds the title as the quickest eighth-mile blown automatic Pro Extreme car in the world.

“I’ve known him for a while actually and we became good friends. He’s been here to Australia about four times now. Initially, we brought him down to give Stuart (Rowland) a leg up with the automatic deal because as you know Stuart comes from a clutch style background. We wanted him to get some familiarization with this style and applying power management with the auto.

“They both work great together. They bounce a lot of ideas around with each other, and what actually goes on. Between those two I reckon I have a pretty good power bank right there. Stuart has been with me since I got the car”, said Mamone

“I haven’t made a lot of laps in that car, but there was definitely a hell of a lot more in it that’s for sure. For me, it was just about getting more seat time.

“The first time out with the Cuda we went 5.94 with the lenco drive transmission, and that was with the old motor. Then we put the new combination together and that’s when we had the dramas with the transmission, or with the quick drive unit anyway, and I hit the wall in Sydney.

“So we parked it for six months or so to regather, regroup, and restructure ourselves. I needed to sit down and sort out which way were going to go and think about our next plan of attack, now that it’s sort of been made for us.

“Everyone goes there to win right, we knew it was going to be a tough field with 16 cars in the pits. What we did and the result we got was a bonus. I was just happy to go rounds, said Mamone.

“We were very consistent over the weekend which is a bonus running the autos, but then again look at John (Zappia) and he’s also pretty consistent pushing levers. We ran a PB of 5.91 against Maclean in eliminations and a PB speed of 243 on Wednesday’s test and tune.

“Right now I have an empty garage. We’ll see what happens, but my plan is to remain in Top Doorslammer but if I’m asked what brand, all I will say is that I like to be different”, grinned Mamone. I’m also looking forward to seeing how the car will perform for Steve and his crew. With what he has achieved with the 55 Chev has been amazing, so can’t wait to see what they can do with the Cuda.”