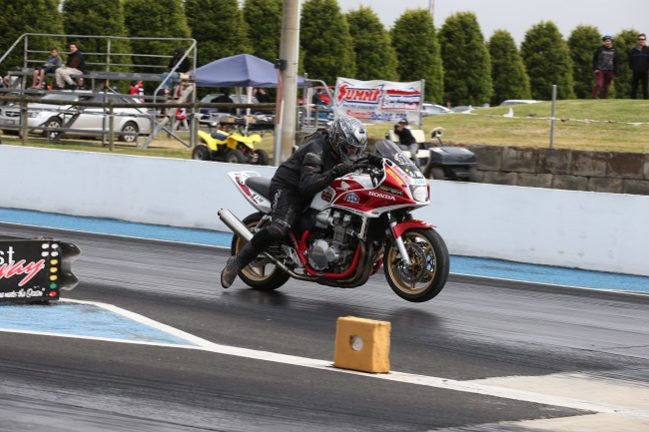 The South Australian currently sits on maximum points ahead of this weekend’s final round of the 2017/2018 Summit Racing Equipment Sportsman Series, to be held at Adelaide International Raceway.

If he can clinch it, he will be the first ever bike racer to win three Modified Bike titles in a row.

“It is great how the championship is sitting heading to the final round – we have five people going into this weekend with a chance of winning the title,” said Finn.

“I have had a terrible run this year, I am lucky to be where I am in the points – my first four events ended with red lights in the first round, I have only turned it around to get points in the second half of the season, so I feel lucky to be in the position that I am now heading to the Grand Final.

“I would be happy for any one of the five of us to win it, but I would like to win of course, and I want to be the first to do three in a row as far as Modified Bike championships are concerned.

“To be able to say I am the only one, the first one to do it, would be very special. I have my fingers and my toes crossed and we will go down, have some fun, and just see what happens! If I can do it, I might have some tears in my eyes I think.”

This time last year, Finn took out not only the title but also the John Storm Memorial trophy. While he might not be in the running for that accolade this year, he has a good idea of who he has his money on for the prestigious award.

“I am not in the running and I was extremely surprised last year when I won it, but my money this year is on Gordon Crawford – that is who I would like to see take it out, and how great would it be to have bike riders take it out two years in a row!?,” Finn said.

He might be on the maximum points possible ahead of this weekend’s Grand Final, but that doesn’t mean Finn is feeling confident of taking out the title.

“I am never confident, I am not confident at all, rather, I am nervous!” laughed Finn.

“I am nervous all of the time and I think that is a good thing, if I wasn’t nervous I would be worried, I think it is a good sign – we are all as good as everyone else and we are only as good as we are on the day afterall!

Finn might be a South Australian, but he isn’t expecting any home track advantages this weekend.

“It is technically my home track, but it is a good three hours and 300 kilometres away from where I live!” laughed Finn.

“Honestly the tracks don’t seem to really make that much of a difference to my bike, I seem to be able to run the same times wherever I go.

“I always go racing with the ambition to have fun, so it doesn’t worry me too much to have home track advantages and so on. Hopefully everyone can travel safe to and from the meeting, and we can all have a good time and party on!”

Like many of his fellow racers, Finn is quick to point out that his racing is far from a solo effort.

“I have some great sponsors and crew behind me,” explained Finn.

“McLeod Drilling, Toll Port Augusta, Deon McHugh Signs, American Musclecar Imports and also Northern Motorcycles, Superbike Performance and Butlers Mechanical are all great support, as are Prime Sports who just produced some nice ‘lairy’ shirts for me – you have got to be colourful out there!

“I have some brilliant crew as well, especially Barry Brookes – he has been missing the last couple of meetings, but he will be here this weekend and has always been a great support to me, helping me get to meetings and driving me home from meetings when I have celebrated a win a little too much!

“It is no small feat either – he drove me 1200 kilometres home once from Alice Springs when I won, and it was my birthday, so I celebrated a lot! He is just indispensable to me and I can’t thank him enough for all of his support.”