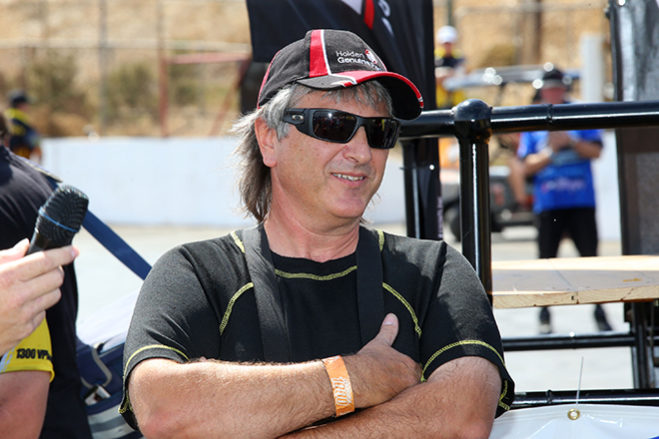 One of the most popular drivers in the ANDRA Top Doorslammer Championship Series is hanging up the helmet, but for the fans of the Holden Trade Club Monaro, the iconic racecar will continue to compete at the highest level of Australian drag racing.…

One of the most popular drivers in the ANDRA Top Doorslammer Championship Series is hanging up the helmet, but for the fans of the Holden Trade Club Monaro, the iconic racecar will continue to compete at the highest level of Australian drag racing.

Fabietti was pleased to also confirm that title sponsor, Holden Trade Club, have recently renewed their support for the team, a relationship that is now entering it’s twelfth year.

Although disappointed to be retiring from driving duties, Fabietti finishes up having taken the Monaro Top Doorslammer to its best ever championship result, finishing the season with a runner-up standing in the ANDRA Championship Series.

Fabietti explained, “This is not something that I take lightly, but after racing for over 35 years, the extremes of drag racing have taken their toll on my body.”

“What most people wouldn’t understand is that in our race car, it’s a violent environment.

“The driver is subject to huge g-forces, violent tyre shake and inevitable crashes.

“A combination of these elements has caused degeneration of the vertebrae in the C4 to C7 discs of my neck, which is now resulting in spasmodic severe neck, shoulder and back pain.

“I love racing but I love the car more and I realise that it’s now time to hand the Doorslammer’s keys over to a younger healthier driver. My motivation is simple – to give Holden and the Holden Trade Club Monaro the best chance of winning a championship.”

The choice for the new driver was a relatively simple one – Top Doorslammer young gun, Mark Belleri.

Long-time competitors on the racetrack, the friendship with the Belleri family goes back 30 years.

Fabietti explained, “We have watched Mark Belleri mature into an experienced and very capable driver in his own right.

The cabin of the Monaro will be familiar to Belleri who has filled in for Maurice on several occasions – in Darwin and during testing in Sydney.

Like the Fabietti machine, Belleri has been campaigning an Anderson Race Cars-built Top Doorslammer, which means Belleri will be able to hit the ground running.

Maurice will concentrate on tuning the car alongside life-long friend and Mark’s father, Lucky Belleri.

“I would like to take this opportunity to thank Maurice Fabietti, Holden Trade Club and Lucky Belleri for the chance to race this season,” said new driver Mark Belleri.

“I really enjoyed racing there (in Darwin). The facility was great and the crowd really gets behind Top Doorslammer. I’m looking forward to going back there in two weeks time driving the Holden Trade Club Monaro.”

Fabietti concluded, “We are doing this for one reason, to win. My body may not be ready to go another season but my mind certainly is – and Lucky and I will leave no stone unturned to make the Holden Trade Club Monaro and Mark Belleri as quick and fast as they can possible be.”