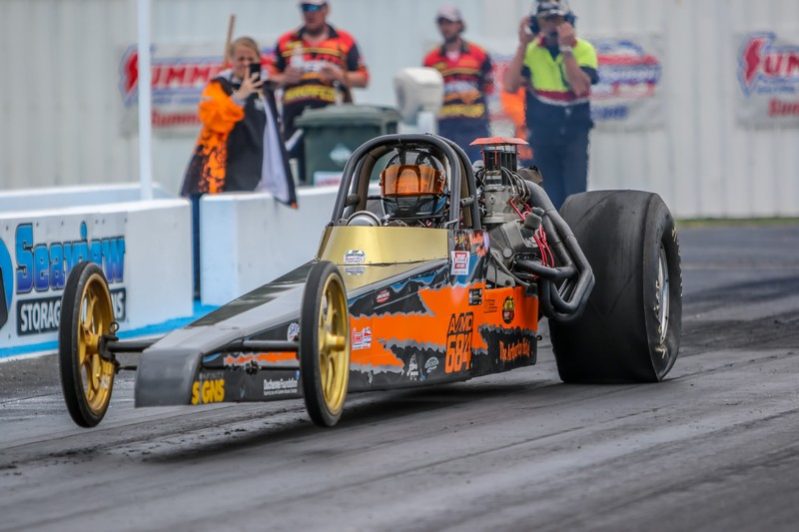 Bradley Hicks will head to this weekend’s South Coast 660 at South Coast Raceway still smiling about his break-through South Coast Nationals victory at the same venue in December.

The South Coast 660 marks round seven of the 2019/2020 Summit Racing Equipment Sportsman Series and will be held at the Portland racetrack across January 11 and 12.

“It was very special, and it always will be,” said Hicks, who retired from wheat and sheep farming at the beginning of 2019 after 47 years.

“I rate it right up there with my four Steel City Charlie Dennis Memorial Series wins and with my very first bracket win back in 1985.

“I have been competing in ANDRA Sportsman Championship rounds for many years, and only once before did I make it to the final, which I lost.

“To get to the final and then win this time was a very pleasing result for me and with the competition being so very tough in all of the ANDRA brackets, it was really rewarding. The number of people who have congratulated me since my win has been rather humbling and very pleasing as well; the drag racing family have a lot of very genuine people in it.

“The incredibly close margin in the final made it even more special too. Win or lose I love close racing and for a veteran racer like me, it was great to see a Modified Eliminator rookie (Josh Baker) in the other lane. Josh is a very tough competitor and will be one to watch in future.”

The final at the South Coast Nats was in fact so close, neither racer knew who had won until told by officials at the end of the racetrack.

“It was so close! He out-reacted me, .001 to .013, so I had a real chase on my hands. We went across the finish line together with no idea who had one till one of the firies gave me the ‘thumbs up’ after I turned the corner,” the 63 year old explained.

“My winning margin was just .00094 of a second! It was a real privilege to race Josh in the final – the Baker family and I have been friends for several years, and they have a wonderful approach to racing, and to life. We were all smiling afterwards.

“All weekend the car ran well other than a smoky cylinder on the left bank; only routine maintenance was needed although I did make a small change to the fuel system on Saturday before my second qualifier, which resulted in my best ever 60 foot time of 1.060, and improved my ET by .08 of a second from the first qualifier, so that was very pleasing.

“The weather was frustrating on the Saturday with the rain but of course that was totally out of anyone’s control, and was the same for everyone. In eliminations I had luck on my side; in every round prior to the final I won after my opponents made mistakes – not that I was perfect; it was just my day to win I guess.”

With a return to the place of his victory now just around the corner, Hicks is hoping he can have another successful outing at the Portland venue.

“I will be trying my best (to win again), but drag racing is such a brutal sport! The fact that I won at the South Coast Nationals gives me a little extra confidence going into the January race, but otherwise once we get to the racetrack everything starts from scratch once more,” he said.

“South Coast Raceway is a fantastic venue; I love racing there. The whole environment has a great feel to it with the green grass, the layout, the facilities and the track itself – plus the hard working and friendly volunteers who get it all together. Invariably the air is very good also, which makes for near best performance.

“I won’t be making any major changes for the South Coast 660, just a little routine maintenance and I have worked to try and stop my engine blowing smoke as it was last round. There is also one small tuning aspect which I learned from Ryan Lee which I will be trying; but my car is very consistent, so in most respects I am very happy to leave it as is.

“I have a lot of people to thank for their support of my racing, including my sponsors Infinity Signs, The Athurton Hotel, Sprint Auto Parts Kadina and Southern Sport Horses.

“I also have to thank my crew – at the South Coast Nationals all of my regular crew had other commitments so I was very lucky that Craig Plummer, Tayla Mellor and Tiana Mannix were able to help, despite Craig and Tiana also crewing for Cooper Plummer in his junior dragster.

“Other important crew members I want to recognise are father and son Greg and Sean Oberti, Mark Wyatt, my brother Adrian when he is in SA, John Brooks, and Angel Dempsey. Thank you also to Doug Elsworthy for the chassis upgrades, Frank Intini for cylinder head repairs at different times, Rhemac Engineering for the initial engine machining and preparation, and Richard from AK Converters.”

Round seven of the 2019/2020 Summit Racing Equipment Sportsman Series, the South Coast 660 at South Coast Raceway, will be held across January 11 and 12, 2020. For event information, visit www.southcoastraceway.com.au or www.andra.com.au