Dobbo: This is a title fight

Dobbo: This is a title fight 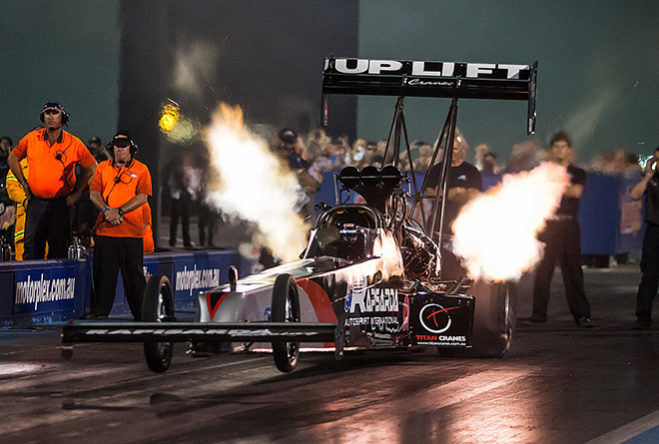 The Fuchs Spring Nationals in Adelaide this weekend will be an O.K Corall style shootout between Rapisarda and Lamattina Top Fuel Racing.

Whatever the outcome, it will set up an intriguing Championship picture ahead of the season decider at the Australian Nationals in Sydney four weeks later.

Since the Fuchs Winternationals in June, it has been a frustrating layoff for Dobson, who leads Phil Lamattina by just eight points.

The charismatic ‘Dobbo’ resides in Perth and with the RAI workshop located in Sydney, it means he is limited to taking mental reps, working with his sports psychologist and training on a reaction timer to stay prepared.

“It’s been hard to tell you the truth,” says Dobson. “I’ve been working really hard and going to a sports psychologist to help with a positive mindset.

“In the old days I’d be out riding my Motor-X bike and just going mad on that. These days I’m just at home working hard doing something or other. The main thing has been just keeping my mind on it and staying healthy.”

Dobson likens the final run in to a heavyweight championship title fight and he is hoping to find an edge at the Fuchs Spring Nationals to set up the finale in Sydney.

“For the last three weeks I’ve been going in to stage in my mind all the time,” he adds.

“Everyday I’ve been going in to stage and putting on the second light and training hard that way.

“The whole focus is not to let it psyche me out but at the same time have a lot of respect there and keep my mind alive.

“I’ve been working hard and I’m taking it like a title fight. This to me is like a fight and I am just so full on focussed on going in and making sure I bop him one before he gets me.”