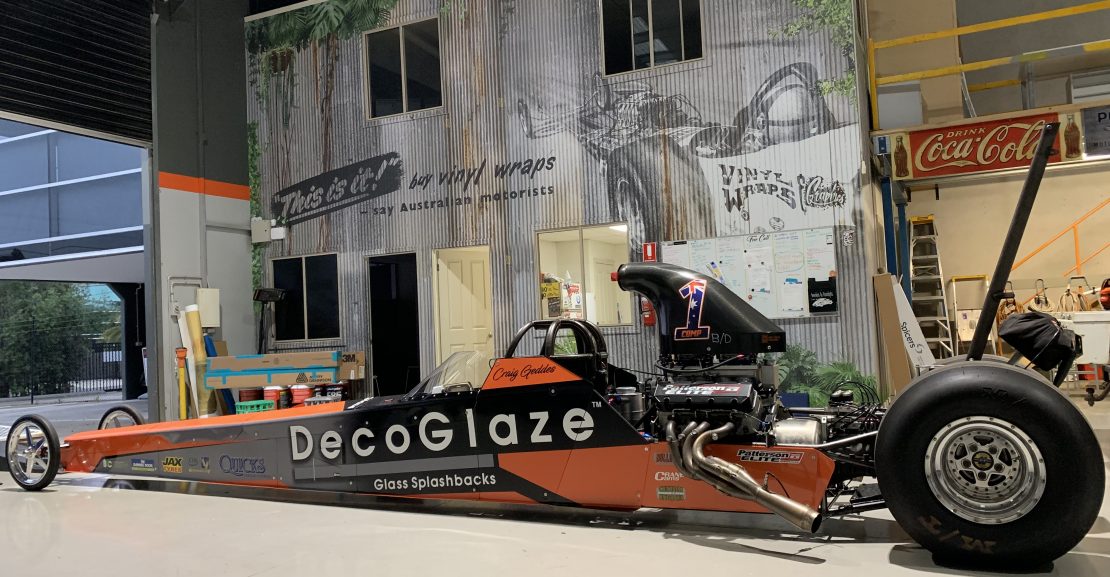 Craig Geddes will be turning heads on and off the race track this Saturday (November 23) when the defending Rowe Memorial trophy winner heads to Adelaide for the 30th running of the Rowe Memorial Classic.

The event will mark round five of the 2019/2020 Summit Racing Equipment Sportsman Series and will host more than 180 racers at Adelaide International Raceway.

He heads to this weekend’s event fresh from a trip to the US and with a brand new look.

“Our 2017 Rowe Memorial winning Cavalier has been sold to Chris Soldatos for his daughter Julia to race in the future, so this year we will be defending our title in B/A with our current championship winning dragster,” Geddes explained.

“The car is running our 335 SB2 Chevy and manual transmission and has just had a major upgrade to its look with a full wrap in the DecoGlaze Glass Splashback colours – it really looks amazing.

“Being just back from the USA where we were crewing with comp racing legend David Rampy, we have also picked up some new tips and tricks as well which we will certainly look to put to use this weekend as we chase the Rowe Memorial once again.”

The racer explains that this weekend’s event holds a special place for him and his fellow racers.

“It will also be great to be back in Adelaide, especially after all of the track upgrades that have been done. The traction there is always great and if the air is good, I think we will see some records being set.

“We are also really looking forward to the challenge of a full 16 car field in SuperComp this weekend.”

The fifth round of the Summit Racing Equipment Sportsman Series – the DecoGlaze Glass Splashbacks Rowe Memorial – will be held at Adelaide International Raceway on Saturday November 23. For more information, visit www.andra.com.au or www.adelaidedrags.com.au