Defelice definitely in with a shot

Defelice definitely in with a shot 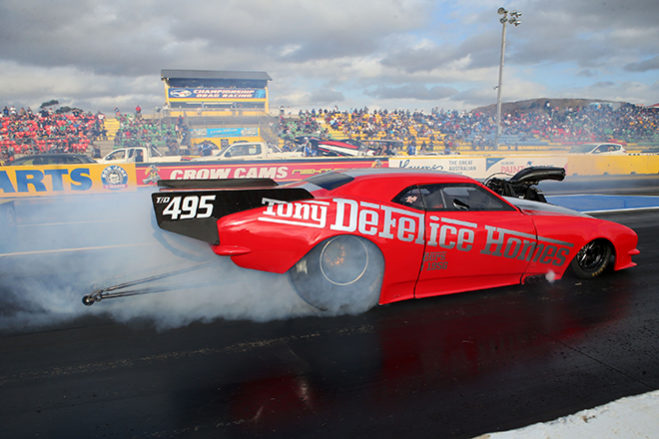 Tony Defelice is confident his 67 Camaro Top Doorslammer will match it with the best of them this Saturday March 12 when the ANDRA Drag Racing Series returns to Calder Park Raceway.…

Tony Defelice is confident his 67 Camaro Top Doorslammer will match it with the best of them this Saturday March 12 when the ANDRA Drag Racing Series returns to Calder Park Raceway.

At the recent Australian Nationals, Defelice worked through a new combination and feels he is now in a position to chase elapsed time and go for it as opposed to working through the kinks.

“We’ve got a relatively new car and a fresh combination from Mike Janis that we’ve taken our own program to,” explained Defelice.

“At the last round we were just treading the water. The car moved off the start line pretty good so it’s just a matter of producing more power and chasing ET’s as opposed to chasing the combination. It reacted to what Murray Anderson wanted to do and we’re headed in the right direction.”

In recent testing Defelice recorded a 6.14 second pass at 235 mph in very hot and difficult air conditions in Queensland. The weather is set to be more favourable at Calder Park giving the team confidence they can be a factor.

“We’re in the ballpark considering it was a really hot day (in Queensland), it’s just a matter of giving us the conditions and we didn’t know what Calder was going to hold (at the Nationals).

“After the start line it was a bit greasy in the wrong lane. And as Murray said we’re just trying to find the right converter for the right combination.

“It’s what happens on the day. Other than John Zappia obviously, it’s on the day. If he gets out of shape he can be beat too and if you eliminate John it’s up for grabs.

Defelice will be joined by Grant O’Rourke, Peter Kapiris, Mark Belleri, Paul Cannuli, Rob Taylor, Geoff Gradden and John Zappia who will make a bid for a record ninth ANDRA Top Doorslammer Championship in a row. Racegoers will also experiecne the spectacle of the Australia vs USA Jet Cars. The action starts from 11am this Saturday March 12 at Calder Park Raceway.