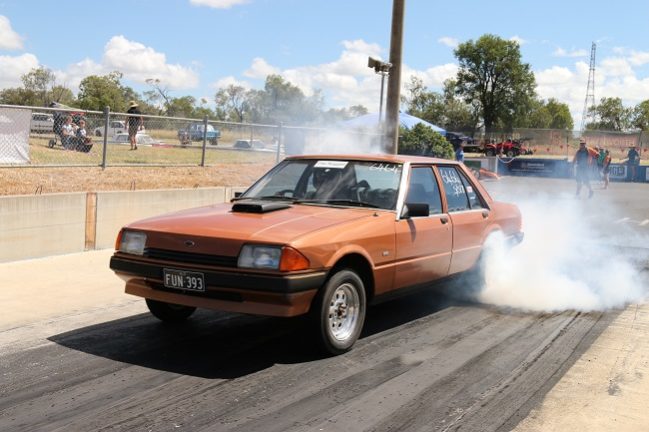 After taking out the Super Street Summit Racing Queensland Championship in 2017, Richard Dawe is hoping to continue what has so far been a strong title defence this weekend at Palmyra Dragway. Round two of the 2018 instalment of the three-round series will be held across Friday 29 June and Saturday…

After taking out the Super Street Summit Racing Queensland Championship in 2017, Richard Dawe is hoping to continue what has so far been a strong title defence this weekend at Palmyra Dragway.

Round two of the 2018 instalment of the three-round series will be held across Friday 29 June and Saturday 30 June before it heads to Benaraby Raceway for the final round in September.

In recognition of his Summit Racing Queensland Championships title win, Dawe was awarded a prestigious copper ANDRA Xmas Tree trophy in what was only his first full season of racing. For the 2018 Series he is once again contesting his street-registered ’82 XE Falcon known as ‘Nugget’, which runs a 393 Cleveland powerplant.

“I have only been racing a short time so winning the 2017 Summit Racing Queensland Championship was certainly unexpected, but very exciting,” said Dawe, who thanks Mal Everett from Mal’s Mechanical Bundaberg for his support of his racing.

“I don’t think being the defending champion adds any extra pressure, I just race my own race and try to do the same thing every time, it is important to be as consistent as possible.

“The Super Street bracket is a pretty competitive division for the Summit Racing Queensland Championship – it would certainly be great to go back-to-back but there is some strong competition, which is something I really enjoy.”

So far, Dawe’s title defence is off to a strong start.

“We had a pretty good round one at Ironbark Raceway in March, coming away with three wins! We were happy to take home a good points haul to be in the running for the championship early,”

“Now we are all ready to go for round two – thankfully we didn’t have any issues after round one and ‘Nugget’ is a pretty low maintenance car.

“Hopefully this weekend we can take away some more points to keep me in contention for the final round, which is being held at my home track of Benaraby Raceway.

“I really enjoyed racing at Mackay last year and I am really looking forward to heading back there – it is a good track and they have a great set-up.

“The Summit Racing Queensland Championship really is a great series I think, giving people the opportunity to try other tracks and meet other competitors and it is beneficial for all of the clubs involved too. Hopefully the series continues to grow.”

As it did in 2017, the 2018 Summit Racing Queensland Championships seeks to develop and promote drag racing in regional Queensland, taking in Ironbark Raceway (Round One – 31st March-1 April), Palmyra Dragway (29-30 June) and Benaraby Raceway (22 September) in 2018. It is expected to attract racers from all over the State who wish to be crowned the ANDRA Queensland Champion for their class.