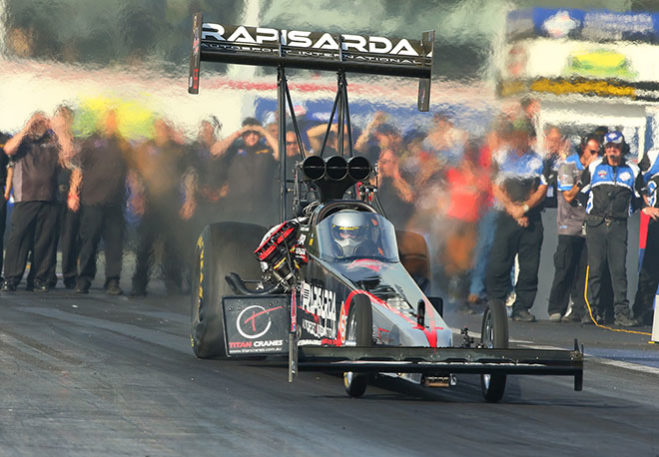 Damien Harris faced adversity from the moment he hit the throttle in qualifying on Friday but Rapisarda Autosport International recovered on race day to take home the ANDRA Gold Christmas Tree at the Fuchs Winternationals.…

Damien Harris faced adversity from the moment he hit the throttle in qualifying on Friday but Rapisarda Autosport International recovered on race day to take home the ANDRA Gold Christmas Tree at the Fuchs Winternationals.

Begley would extend his campaign further by going on to defeat Steve Read in the semi final setting up a meeting with Harris who came home strong on a 4.756 from a 6.030.

“I’m pretty elated for the team, they’ve been working real hard all weekend,” said Harris. “I’ve been working with Santo Junior for 18 months now and we haven’t had a win. We’ve got close but this is just awesome for Junior and the family, I’m really pleased.

“It was a tough race day, we had to climb over some really tough competitors in Phil and John Lamattina to make the final. It was a bit of a rough start to the weekend shaking the car twice in qualifying and to come back and win it from that is just awesome.” 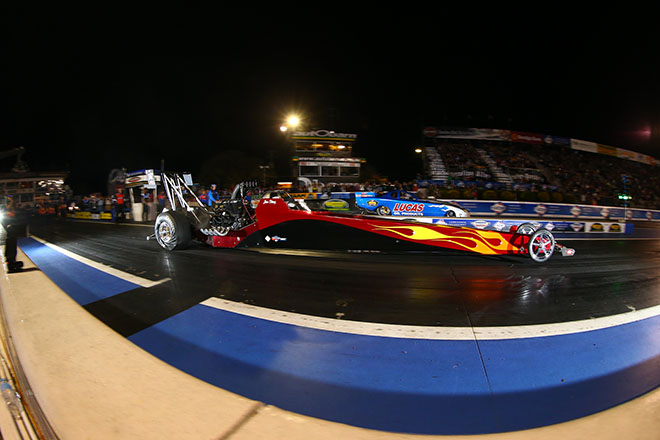 The crowd were expecting something big in the final but the Winternationals became the “Upsetnationals” as Phillips overpowered the track and spun the tyres allowing Jon Sting and his dragster to take the win light and his first Group One Winternationals title on a 5.589.

“It’s great,” said Sting. “We were here a year ago, qualified number two and it got rained out.

“We’ve had a bit of bad luck business-wise so we haven’t had the income to race. This was going to possibly be a farewell meeting!” laughed Sting.

“I’ve got some new crew guys, they’ve given me a bracket car and that makes it easy.” 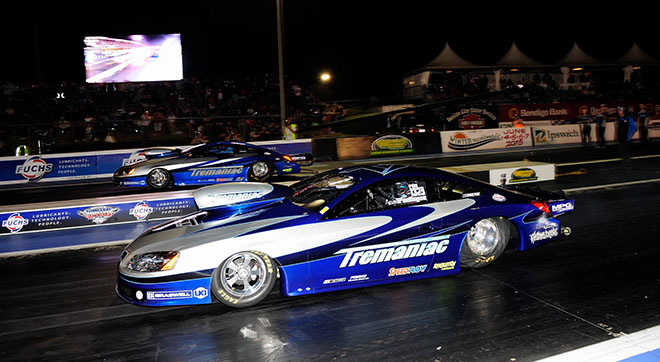 The Pro Stock boys continued their record setting ways running consistent six-second times as Lee Bektash recorded a 6.96 at 196.39 mph on a second round solo pass followed by Aaron Tremayne on a 6.97 at 196.82 mph to defeat Nino Cavallo.

Bektash and Tremayne then met each other in the semi final for what would become the quickest side-by-side Pro Stock pass in Australia with Tremayne coming out on top on a 6.965 at 196.56 mph from a red lighting Bektash on a 6.961 at 195.28 mph.

Sibling rivalry took centre stage in the final with both Aaron and Tyronne Tremayne facing off but history repeated itself as Tyronne red lit on a 6.96 while Aaron crossed the line victorious on a 7.021.

“We were aiming to go low ET (in the final), I don’t know if the track got a little bit cool but it didn’t have the bite I threw at it and my engine was hurt pretty much from day one, we had a leaky sleeve in the engine.”

On that record setting semi final pass both competitors triggered the red light as Bektash left the line .021 second too early while Tremayne still got the win even after he hit the throttle .002 seconds early.

“I knew it’d be on against Lee. I was a bit worried about my engine but thank God it still ran real fast and he was red and I was a little bit red as well.”

Six times Top Doorslammer Champion John Zappia was the man to beat all weekend and when all was said and done, he was the man standing on the podium handing the Gold Christmas Tree to his sponsor and Winternationals naming rights holder, Fuchs Lubricants.

It wasn’t quite the 5.76s we had seen earlier in the weekend but consistent 5.80s were enough to defeat Stuart Bishop, Grant O’Rourke and lastly Daniel Gregorini in the final.

Graeme Morell continued the “Upsetnationals” theme in Top Fuel Motorcycle by taking a solo win when Neville Smith lost power after the burnout in round one. He then eliminated Mark Drew who had his first problematic run of the weekend leaving Morell to advance against Chris Matheson.

The final however was never in doubt as Matheson powered away to an easy win on a 6.374 leaving his opponent to shut off early.

Finally in Pro Stock Motorcycle Maurice Allen and Luke Crowley renewed their on track rivalry as both riders put down consistent passes in the 7.20s and 7.30s on their way to the final.

Allen would record the quicker ET of 7.265 but his .156 reaction time let him down as Crowley stole the win on a .042 reaction time and a 7.314 pass for a dramatic holeshot win.

For full results from the Fuchs Winternationals please click here.