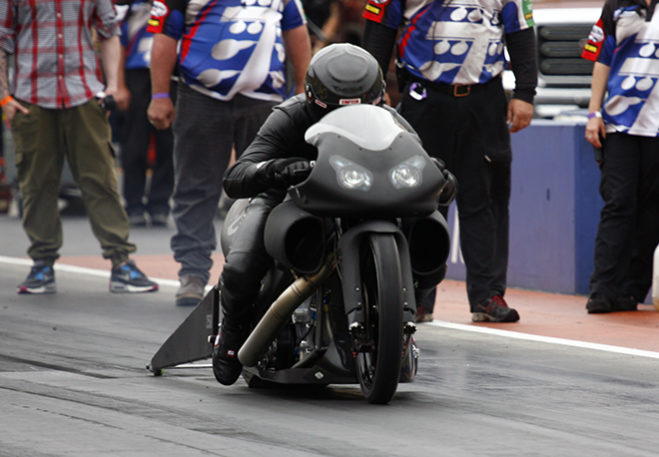 The Australian Nationals return to Calder Park Raceway for the first time in 15 years January 23-24 attracting over 250 entries in the ANDRA Drag Racing Series and Summit Racing Equipment Sportsman Series.…

The Australian Nationals return to Calder Park Raceway for the first time in 15 years January 23-24 attracting over 250 entries in the ANDRA Drag Racing Series and Summit Racing Equipment Sportsman Series.

Pro Stock Motorcycle rider Corey Buttigieg can’t wait for the event as he rides his Pro Stock Harley Buell in an effort to jump Scott White for the Series lead.

Buttigieg started his campaign in Sydney at the East Coast Nationals in November with a runner up behind White who won his first ANDRA Christmas Tree at that event.

“I had a perfect reaction, good for a low ET but unfortunately I lined the bike a little off the mark and it took me to the wall,” said Buttigieg.

“With no testing or tuning prior to that meeting it wasn’t worth the risk so I shut down.

“We are excited to be racing at Calder this week – having national rounds in our backyard its good for all the local sponsors, teams, spectators, supporters and drag racing.

“I am looking forward to running the new Pro Stock Buell in a Group 1 class where everyone has to keep stepping up, it keeps the racer and spectators interested in this sport.

“The Nationals will be good for Calder bringing more spectators to the sport along with the dedication from (promoter) Peter Pisalidis who helps the racer and Calder Park Raceway as much as he can.”

Beyond the Nationals Buttigieg is expanding his operation to include Junior Dragsters and has some exciting plans for the future in both Pro Stock Motorcycle and Competition Bike, however he is keeping tight lipped at this stage.

“We have a new addition to the team this year but with four wheels, (my kids) Abbie and Chilli running Junior Dragster along with new bikes in the pipeline which will be released this year as well.

“Dan Lesnock, friend and Crew Chief is constantly working non-stop on the (Pro Stock) bike and we are excited with two new sponsors this year, Terry from IM Composite Technologies – master at building and designing carbon fibre products – and Darren and his team at Rams Head Service – experts at machine work to get the most from the Buell.

“Colin, Andrea and the team from Geelong Harley Davidson have supported us from the start as well as being good friends, Fasta Moto, Wes Engines, Mr Lee Bektash and his team for everything they do for as us both teams have a lot in common, Val Dick from Energy Coils to spark up the day, Peter Turk for hoses and fittings, Matt and Bundy at PBI Sprockets, Gareth at H & K Electrics, Smiley at Creative Edge paintworks and of course my lovely wife Karissa for her constant support and buying of the Buell.”