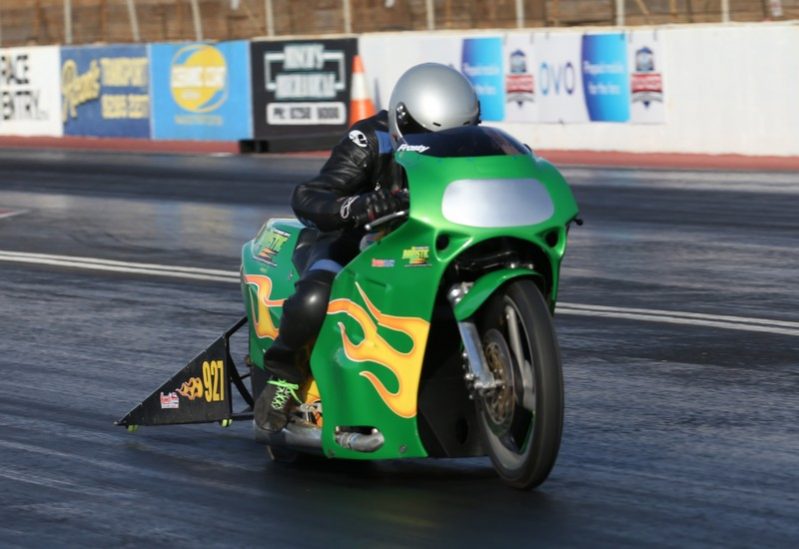 While it is true that most championships do not come easy, for Tony Frost, the road to claiming the 2017/2018 Summit Racing Equipment Sportsman Series Australian Title for the Competition Bike bracket was particularly rocky. With the support of his fellow racers, friends and family however, he was a…

While it is true that most championships do not come easy, for Tony Frost, the road to claiming the 2017/2018 Summit Racing Equipment Sportsman Series Australian Title for the Competition Bike bracket was particularly rocky.

With the support of his fellow racers, friends and family however, he was able to hoist a prestigious ANDRA Gold Christmas Tree at the final round of the season.

“It all stated a couple of months earlier when we did some damage while testing the bike at Calder Park Raceway,” Frost explained.

“We pulled the bike apart then and thought we had found the problem, a broken gearbox.

“In the first round at Adelaide we went down the track with an 8.3 second pass straight off the trailer, so we were pretty stoked with that and thought we had the problem well and truly sorted.

“However, the second round saw us unable to change further than third gear after we put some more speed in the bike, and it really made some awful noises during that run.

“When we got back to the pits we thought we had broken a crank shaft. Luckily Trevor Birrell offered a hand and for us to go back to his workshop to pull the engine out to look at what the damage was.

“We worked there to nearly 4.00am on Saturday morning, discovering in the process that it wasn’t a broken crank shaft we were dealing with, but instead a broken cam that had also broken the timing chain which was all locked up in the bottom of the motor.

“Luckily, with Trevor’s help and all of the spare parts he had lying around, we were able to put the motor back together; heading to bed at around 5.00am before coming back at 8.00am to finish it off.

“We arrived at the track around 10.00am and with plenty of people rallying around to give us a hand, we had the bike fired up and ready to go racing just before 11.00am.

“Then, the winds came, and it was a bit of a godsend for us really – little did we know, we had broken a part of the gearbox too so when we went out for the first elimination run, it again wouldn’t go any further than third gear.

“As a result, we went across the finish line with the bike absolutely screaming on the limiter and only just beat Jase McFarlane to the line – so it was lucky for us that the weather had forced a switch to the eighth mile distance!

“We had a bye in the second round and just took the green light, knowing the time restrictions the event was facing and also considering the fact that we had a damaged bike.

“When it came time to go to the final, we were hoping that it might change gears, but we knew were up against it racing Robby Cassar and his new bike which was on-song. It was a good race, but he was well and truly across the line in front of us. Lucky for us, we were able to still take out the title.”

After such a battle to the end, it is no surprise to hear Frost say it was pleasing to hold up that championship trophy.

“It felt pretty good and was a great reward for all of the hard work that was put in by not just myself, but also all of our team and our sponsors,” Frost said.

“It is a shame I couldn’t race a good race in the final, but after the years of stepping up through Modified Bike and then into Competition Bike, it was really good to have that pay-off for all of the hard yards put in.”

While the weekend was certainly challenging for Frost and his crew, they do report a heart-warming side to their experience.

“All of the offers of help and the well wishes that poured in from our fellow racers was really greatly appreciated, there is a real mateship in Competition Bike and in drag racing and it was really great to see that in action,” Frost said.

“The Competition Bike field in particular is a great one to be a part of – we are working hard at the moment to get it back to a stage of having full fields all of the time, and we are very pleased to see that there are some Modified Bike guys looking to step up and race with us moving forward.

“The class is a real stepping stone to the elite bike categories like Pro Stock Motorcycle and Top Fuel Motorcycle, so I think it is important that we all do all that we can to make sure that it continues and that it keeps growing. When the bikes do come out they are tough racers and it is great to see the competition and the spirit that is shown, and I want to see that grow.

“We will certainly be back next season – at the moment we are working out what needs to be done to fix the damage with the motor and deciding whether we will stick with the same combination or go to another motor size.

“We are looking to hopefully do some more travelling this coming season, but that will depend on the business expansion we are undertaking at the moment and how much time I can get away. We will do all that we can though to be at as many events as possible, that is for sure.

“We are also working on a second bike to run in local events and to run in Modified Bike as well. Again, we will have to wait and see what the damage bill is like for the existing motor first though!” he laughed.

In the meantime, Frost wants to thank a number of key people that have made his title possible.

“I want to thank my wife Tracey; and all of my crew, especially Rick, Jill, Simon and Kim for all of the travelling they do and the help they give me, I couldn’t do this without them,” Frost said.

“I also need to thank my sponsors, Ballistic Racing, Forcewear Components, Trevor Birrell and Speedflow Warrnambool. Hopefully they can all come on board again next year and we can have another great season together.”