Commitment pays off for Tremaynes

Commitment pays off for Tremaynes 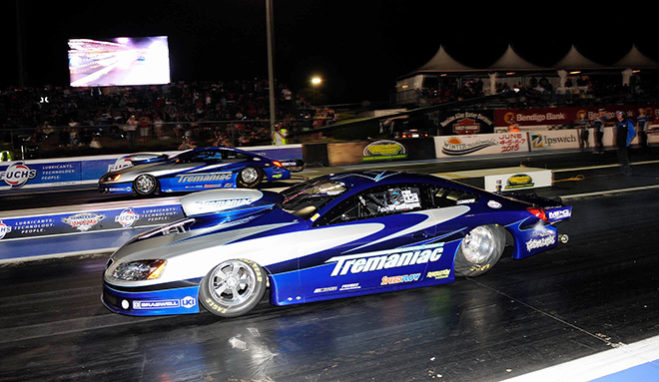 The Fuchs Winternationals of 2014 was a very special meeting for Tremaniac Racing and saw the fruits of four years of labour for the team.…

The Fuchs Winternationals of 2014 was a very special meeting for Tremaniac Racing and saw the fruits of four years of labour for the team.

“We managed to achieve everything we set out to at this meeting,” explained Aaron Tremayne. “Multiple six second passes from both cars, a new Australian Pro Stock speed record of 196.85 mph and most importantly taking first and second places for the meeting with both Tremaniac Racing cars in the final. Given the competitiveness of Australian Pro Stock racing right now, this is right up there as one of our proudest achievements.”

Four years ago the Tremaynes set themselves a challenge. They wanted to develop and run their own independent engine program.  Given that the USA is the epicentre of drag racing expertise and the proven source of the majority of class leading teams’ engines, stepping away from US supplied engines and into their own development program was a big decision. Aaron, who along with father Kerry, heads up the program, said, “we enjoyed many years of good relationships with US engine suppliers, however, we were really motivated to run with our own program. So, four years ago we began development of our TX1 cylinder head design”.

The initial development of the cylinder head design was a collaborative with Noonan Race Engineering who provide V8 Supercar engines for Brad Jones Racing. “Once the first TX1 heads were complete and on our engines, it has just been a process of countless hours of R&D in the workshop, in our dyno room and on the racetrack – just constantly looking to refine the combination. With the results from the Winters’ and most particularly the new speed record, it shows all the work we’ve done now has us with consistent class leading power and we couldn’t be happier” explained Aaron.

That said, the team aren’t sitting around with a Winternationals hangover. Aaron,  has been busy working on an Aussie Pro Stock customer’s engine and had two other customers’ engines sitting in the workflow. “Yep, people have certainly seen what our engines do now and they’re keen to come on board with our program. It’s great to be able to provide our products to other people. At the end of the day, our engine program is a business, it’s there to provide products to customers – and we love to see our customers winning races with Tremaniac engines.”