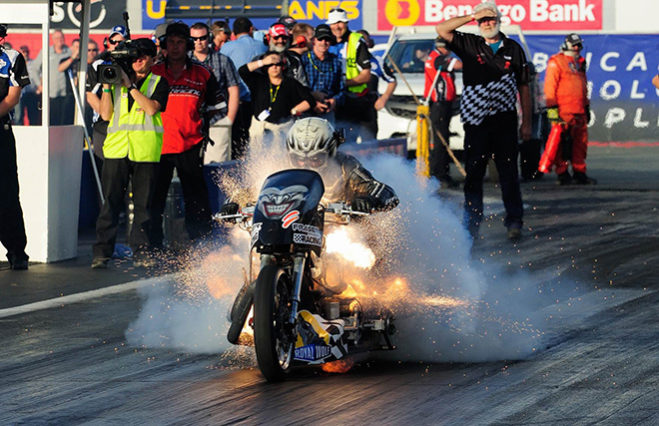 Just over six months ago Chris Porter was celebrating a Top Fuel Motorcycle Championship. Now the current number one is facing a lengthy time on the sidelines and a total rebuild of Fraser Motorcycle.…

Just over six months ago Chris Porter was celebrating a Top Fuel Motorcycle Championship. Now the current number one is facing a lengthy time on the sidelines and a total rebuild of Fraser Motorcycle.

Going into the Fuchs Winternationals at Willowbank Raceway it was all smiles as Porter ran a 6.56 elapsed time at 213 mph at the Winternationals Warm Up event a week prior.

Unfortunately those smiles became a grimace as the week soon turned into a nightmare.

“On the 6.50 pass there was a 0.3 transmission slip so we pulled it down and found the compression spring was a bit down,” explains Porter.

“I ordered a new one from Scotty Owens in LA, they said it would be here Friday so we left it apart and waited.

“DHL called and said it won’t be there till 12 on Saturday and with qualifying at 2 pm there wasn’t enough time to wait so we put it back together and pulled some power out hoping to get a pass in.”

Lining up with Mark Drew in qualifying was a complete contrast. Drew went on to record a 6.372 while Porter’s bike erupted into a fireball torching both cylinder heads, wiring, air lines and the crank.

“The thing with nitro is you must have load other wise kaboom. “What I was thinking is not fit for print, lucky we don’t have helmet mics.

“The first thing I knew was a bright light and the bike shut down. It didn’t feel that bad at the time but as the photos show, it was.”

Facing a complete rebuild, the 2013 Champ is poised to miss the next round of the ANDRA Drag Racing Series at Hidden Valley in the Northern Territory and doesn’t expect to be back until the season is winding down.

“I’m out at least until Sydney. It will be hard to catch Mark Drew and after Chris Matheson’s Winternationals win running 6.374 with a shut off at 800 feet, he’ll be on a high to win Darwin.

“As always I have to thank Fraser Motorcycles and Jamie Noonan from Noonan Race Engineering.”