Chris Porter at the pinnacle once again

Chris Porter at the pinnacle once again 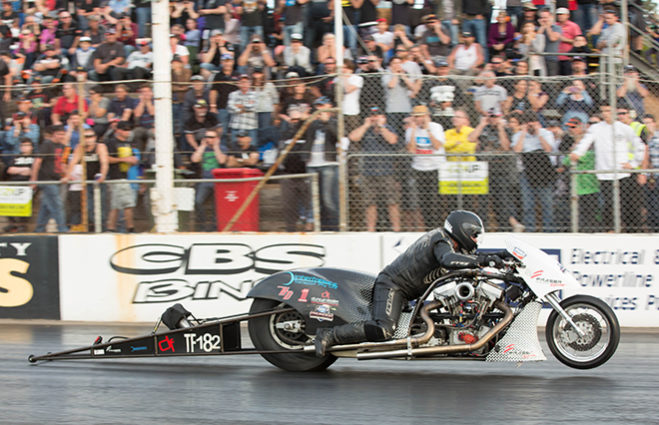 Last week at the ANDRA Championship Grand Final, Top Fuel Motorcycle featured one of the more intriguing tales with three of the best riders on three of the baddest bikes squaring off for glory.…

Last week at the ANDRA Championship Grand Final, Top Fuel Motorcycle featured one of the more intriguing tales with three of the best riders on three of the baddest bikes squaring off for glory.

Rob Cassar played the spoiler but ultimately Chris Porter top qualified over his Championship rivals Chris Matheson and Mark Drew to set up what would become a race for the Championship in Round 1.

Porter reacted quickest and led all the way from a stuttering Matheson to take the win and with it an unassailable lead in the points chase despite Mark Drew joining him in the final.

The final was a rematch with Drew from the East Coast Nationals and although the result was the same, it was much closer over the 1000 feet distance. Drew crossed the finish first with a 5.71 ET from a 5.72 to win by approximately 5.2 inches at 180 mph!

“It’s great to be number 1 again,” said Porter. “It wasn’t easy with guys like Matho and Drew to get past.

“I didn’t have  my own  crew this meet as both were busy in Queensland so I asked  Adam from APL Cycles  who I’m helping  get  his nitro bike license this week if he would  help out so with him and my son Ty we headed  off to SA.

“When I got there Wednesday the track wasn’t good but I gotta give credit to the track crew, they got the best they could out of it.

“The plan was less nitro percentage, less timing, less clutch and luckily for us it worked with a 5.921 off the trailer. We stayed with the plan and just tweaked the clutch controls through the day and got the win over Chris Matheson.

“That with the top qualifier point sealed the number 1 for us so on to the final against Mark Drew. Same tune more clutch and I think the best race of the meet .003 at 180 plus mph. Can you tell me the gap at the end becuase I could not see it?”

“As we all know we can’t do this without our sponsors Fraser Motorcycles, Interfreight Transport and Duncan Foster Engineering.”