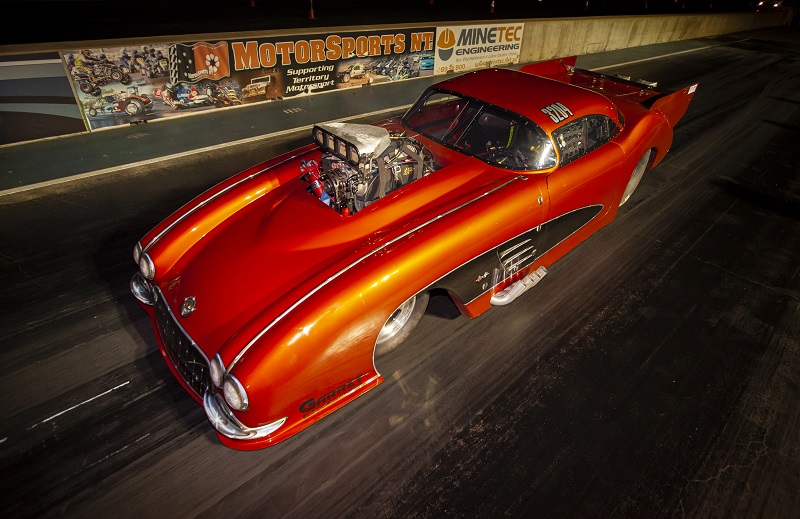 The Top End Nationals event will host round one of the new Australian Drag Racing Championship and also the Summit Racing Equipment Sportsman Series.

Henning started racing in 1990 in Super Street, before progressing to Supercharged Outlaws and now Top Doorslammer.

He plans to compete in his Corvette Top Doorslammer at not only Darwin’s Top End Nationals but also the Desert Nationals at Alice Springs Inland Dragway the following weekend (July 24-25) as well as at ADRC events across the season in Adelaide, Victoria and Perth.

“After being introduced to him by drag racing legend Camp Stanley, we had the car built by Garrett Livingston of Garrett Race Cars in the USA to replace my John Payne yellow Corvette that I had been racing in Supercharged Outlaws,” Henning explained.

“We stepped up and ran it for the first time as part of the exhibition at the Supercars event in Darwin in June, but its competitive debut will come with the Top End Nationals at the Hidden Valley Drag Strip.

“We are certainly feeling very excited about the upcoming debut and are enthusiastically taking on board any advice we can get from all the great people that surround us in drag racing. I am feeling a bit nervous; I really want to put on a good performance, but I am really looking forward to getting out there.

“As we get ready for the Top End Nationals, I would like to take this opportunity to thank my wife Karen and my son Jay for keeping me going through all the tough parts that come with racing.

“I would also like to thank Matt Abel who is always ready to help people out in any way that he can.”

The Top End Nationals will be held at the Hidden Valley Drag Strip across July 16-17. For event information, visit www.hiddenvalleydrags.com.au

The Top End Nationals event will be followed swiftly by the Desert Nationals at the Alice Springs Inland Dragway across July 24-25. For information on that event, visit www.cadra.com.au