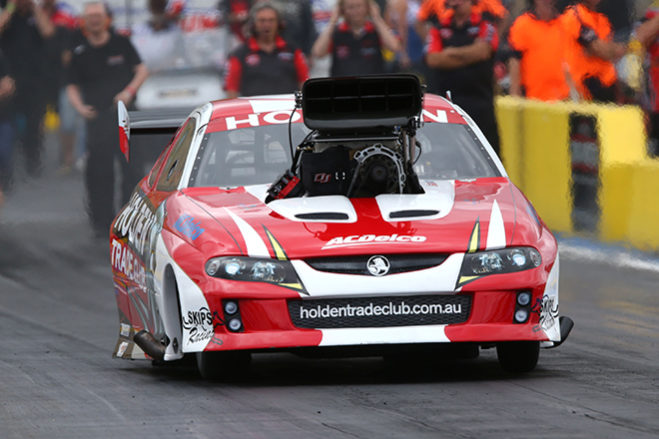 Mark Belleri rattles off five second passes on a regular basis. But last time out at Calder Park, the Holden Trade Club team came away disappointed.…

Mark Belleri rattles off five second passes on a regular basis. But last time out at Calder Park, the Holden Trade Club team came away disappointed.

On March 12 Belleri will get the chance to make amends when Top Doorslammer returns for one day only in the penultimate round of the season.

Belleri qualified seventh at the Nationals with a time of 6.392 seconds. That set up a first round pairing with John Zappia who qualified second and put lane choice to good use when he recorded a new track record 5.749-second pass.

“The Nationals wasn’t the best race for the Holden Trade Club team, we didn’t qualify very well, got Zap first round and got beat with a 5.7,” said Belleri.

“The next round at Calder we are expecting to go better with good data from the Nationals. The car should be able to dip into the fives.”

Despite the team’s troubles, Belleri maintains the Calder start line is as good as any around the country as Zappia looks to wrap up a record ninth Championship in a row while Peter Kapiris, Grant O’Rourke, Paul Cannuli and Belleri remain separated by just 70 points from second to fifth.

“The start line is great at Calder, it’s right up there with the best tracks so I can’t see any reason why the Holden Trade Club Monaro can’t run in the fives.

“With only two meetings left, Zap has pretty much got the Championship sewn up, but it will be a good battle between Peter, Grant, Paul and myself for second place.”

The ANDRA Drag Racing Series returns to Melbourne with Top Doorslammer and the USA vs Australia Jet Cars for one day only on Saturday March 12.