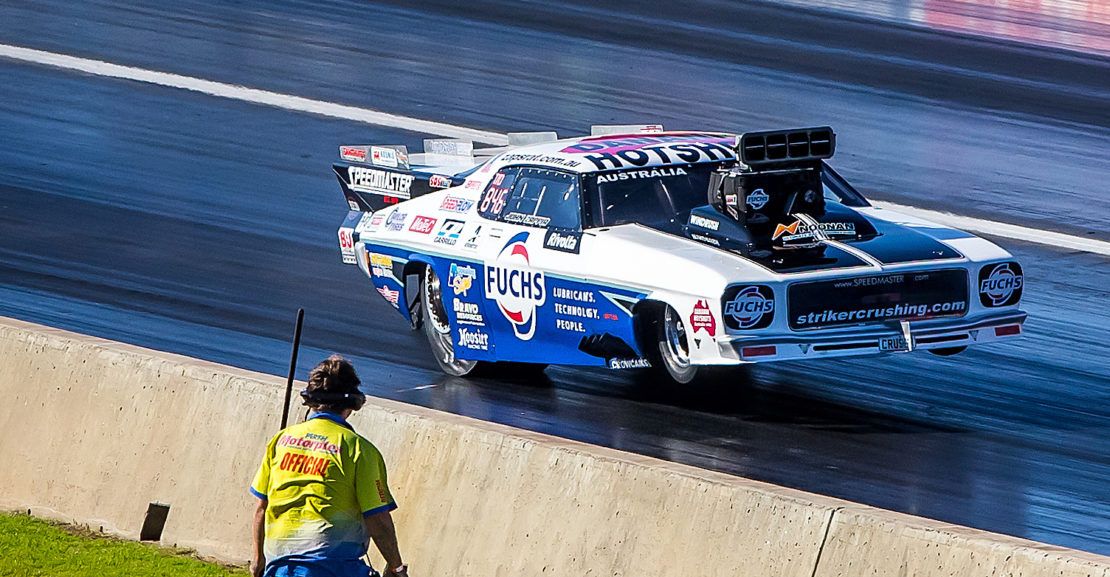 John Zappia and the Fuchs Monaro’s successful start to 2017 has continued with the team earning the WA Top Comp Championship at Perth Motorplex Grand Finals.…

John Zappia and the Fuchs Monaro’s successful start to 2017 has continued with the team earning the WA Top Comp Championship at Perth Motorplex Grand Finals.

In a field containing some of the toughest blown alcohol racers in the country, the feat was never going to be easy and while some hurdles were thrown at the team they eventually proved good enough in a critical race against chief rival Adam Marchant. It was Zappia’s first Top Comp championship since 2010.The best air conditions of the season greeted teams at the Motorplex, but a cooling track would prove challenging throughout the night.Zappia’s first qualifying pass was a pedalling 5.84, with the car doing a spectacular wheelstand, owing to the extra horsepower from the conditions and the tight track. Running late in the compulsory qualifying session after some oildown delays, Zappia was able to improve to a 5.78 to qualify second but some sparks from underneath the car indicated all was not well.“We didn’t know where the sparks were from initially but we figured the clutch would be a good start,” he said. “We started changing the gearbox ratio when we got back and we missed inspecting the inside of the clutch can properly. We then realised late that the clutch had broken a lever and we had a race against Adam Marchant coming that was going to decide the championship.”With the clock counting down, the team made the decision to run the clutch with just five levers and hope it would be enough to take out Marchant’s tough Top Alcohol dragster.“We watched Pino Priolo take out another of our rivals, Steve Aldridge, ahead of us, so then I knew it was up to me,” Zappia said. “It shook the tyres because it needed more clutch but we got the job done with a 5.91, which secured us the Top Comp championship and a place in the B Final.”Arriving back in the pits and with turnaround time limited following more delays, Zappia and the team made a rare decision to withdraw from racing.“Had we been in an A Final we might have given it a shot, but we knew we had won the championship and we didn’t want to risk running the car with the clutch below its best,” he said.“The good news was that by us withdrawing, our almost-team mate Kelvin Lyle got to race in the B Final and run another five-second pass, adding on to his earlier 5.92 personal best which was great to see.”While Zappia expected some record times might have been available, the margins were thin for quick performances.“The car performed well engine wise, but we didn’t get a full clean pass – we were making horsepower, we just couldn’t use it. The cold air combined with stoppages meant the track was colder and trickier than we are used to here in Perth.”As always, Zappia was looking at the positives of his mechanical troubles.“It was good to find the problem. You run valve springs and con rods for so long, but you run clutch levers forever and they do a lot of work. Everything has a life and the consistency this team has involves working out what the safe life is for a part.”The Fuchs team will now run their maintenance on the car and do some close checks before loading up for Sydney in May and the Winternationals in June.“Thanks to all our local supporters and sponsors, to add a Top Comp championship to 10 ANDRA championships, it doesn’t get much better than that.”