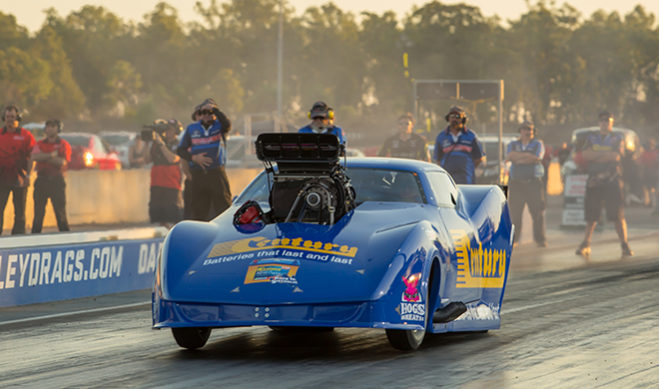 The entry list for the 2015 East Coast Nationals continues to grow and one of the biggest names in Australian Top Doorslammer will have a new teammate at the November 7th and 8th event.…

The entry list for the 2015 East Coast Nationals continues to grow and one of the biggest names in Australian Top Doorslammer will have a new teammate at the November 7th and 8th event.

Team Bray Racing will again be a two-prong attack but this time father Victor will not join Ben for the event.

Whilst Ben will be piloting his almost new Century Batteries ‘79 Corvette machine, Team Bray will have a new car under the banner.

Experienced Top Doorslammer pilot Andrew Searle will be taking the wheel of a new ’67 Mustang, based on the Murray Anderson chassis previously under Bray’s Holden Monaro.

Bray Jnr explained, “It’s a new weekend for us, my Corvette will have a brand new livery and my old car is now an entirely new beast!

“Andrew has re-bodied, re-tinned and rebuilt the car and the results are simply amazing! He has worked day and night to get it done and it’s a credit to him, the car looks like it’s going to be a rocket ship!

Bray added, “For me the weekend is about taking some steps with the new car – first to get the car’s first 5 second pass and hopefully qualifying in the tough Top Doorslammer field, which is a feat in itself.

“To leave with a victory would be an outstanding result.”

Andrew Searle was also happy to be joining the field. “To be back in Top Doorslammer and running with a quality team like Team Bray is a dream come true. Victor and I have just worked out it’s been 13 years since I last raced in these cars and to be back in the mix is a good feeling.”