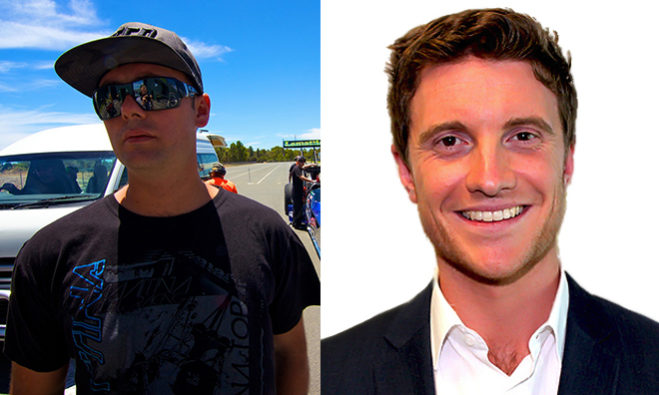 Hambridge is no stranger to the drag strip as an accomplished driver in Top Alcohol, Outlaw Nitro Funny Car, and most recently the Lamattina Top Fuel Dragster at Hidden Valley Drag Strip.

“I am excited about being part of the show,” said Hambridge.

“I can bring a different perspective and a technical background to the show that has been missing and hopefully that will enhance the product.

“As a racer and Crew Chief myself I will be trying my best to represent all the competitors fairly and professionally to help make a great ANDRA Drag Racing TV show.”

Joining Aaron is Lachlan Wills, a 27 year-old TV and radio host, with experience in the media over the past 10 years.

The Journalism graduate from La Trobe University in Melbourne was Eddie McGuire’s sports presenter on Triple M radio for many years, before going on to host his own shows on the top-rating network.

Lachlan has covered motorsport for the past decade; with both Melbourne Sports Radio station SEN 1116 and Triple M, reporting on Formula One, Moto GP and V8 Supercars – interviewing the likes of Daniel Ricciardo, Marc Marquez and Jamie Whincup.

He has become a regular fixture in Northern Territory Motorsport, commentating Drag Racing, Burnouts, Dirt Karts, and the Red CentreNATS.

Lachlan has also worked on Channel 7, the ABC, Network Ten, Fox Sports and Collingwood TV, as well as The Age.

“Speedweek is such a great part of the Australian Motorsport tradition, and to now be involved is a very, very big honour,” he said.

“Covering the Drags is awesome, I’ve got a great deal of admiration for the drivers and the race crews, who ply their trade in such an impressive way.

“Working with a gun like Aaron is a real big honour, and I think we’ll have some fun and hopefully play our small role in making sure the viewers get a great show to watch.”

The new commentary tandem will make their debut from Nitro Up North at Hidden Valley Drag Strip this Sunday 31 July from 2pm on SBS HD. Repeat screenings will be available via SBS On Demand, Fox Sports, ANDRA.com.au, Speedweek.com.au, Motorsports TV and Vimeo.