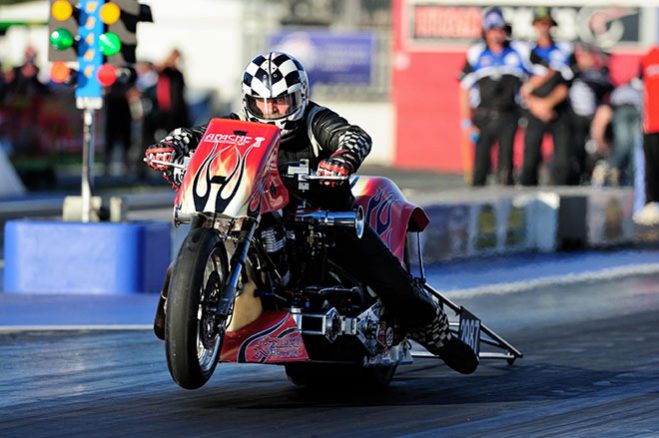 The 2015 ANDRA Championship Drag Racing season kicks into gear this weekend featuring Round 1 of the ANDRA Drag Racing Series for Top Doorslammer and Top Fuel Motorcycle at Perth Motorplex.…

The 2015 ANDRA Championship Drag Racing season kicks into gear this weekend featuring Round 1 of the ANDRA Drag Racing Series for Top Doorslammer and Top Fuel Motorcycle at Perth Motorplex.

Nitro Slam will see 16 Doorslammers vying for a spot in the eight car field while the healthiest Top Fuel Motorcycle line up in some time will pit 13 two-wheeled warriors against each other in a stoush for the first ANDRA Drag Racing Series points of the year.

“I think at least 10 are from WA which will leave the door open for a WA Championship maybe next season and a few new racers getting out on the track with the potential of increasing the national round field in the future,” said Drew.

“Danny Makin will be testing on Wednesday on one of my bikes I sold him 18 months ago. It’s a slow process learning these machines and without someone helping with the right advice, a lot of bikes never get down the track because there are so many variables.

“Without experience it’s hard to know what change to make to get the bike down the track. The longer riders persist and ask the right people for advice, eventually, hopefully we will have a lot more competitive Nitro bike class.”

On his lightning quick Nitro Harley imported from the US in 2014 and debuted at the Fuchs Winternationals, Drew hopes this Nitro Slam is the beginning of a repeat performance but he knows he’ll have his work cut out as both Matheson and Porter look to wrestle the Championship crown back way from him.

“I’m hoping Chris (Porter) has sorted things out as he has told me he is hoping for some low side by side six second passes. (I’m) looking forward to see Chris Matheson on the track, hopefully he doesn’t take long to get the Jack Hammer sorted and competitive.

“We have had one meeting since the round in Darwin, we ran a couple of 6.42s with a reasonably soft tune up. I’m pretty sure we should be able to run it in the 6.30s this weekend.

“The more meetings I can do outside of Championship rounds the more track time I have for experimenting with tune ups to try and go quicker. At the Championship rounds it’s more important to get to the other end of the track without blowing the rear tyre off and doing enough to win to take away the points.

“I’m hoping to be able to run consistently enough to be on top of the points at the end of the season.”

While his focus is on the title, Drew will have another milestone on his mind this week when his son Torin makes his on track debut, albeit on four wheels, at the Test n Tune scheduled for Wednesday.

“I’ll have my 10 year old son Torin Drew out for the first time in his Junior Dragster at Wednesday’s testing,” explained Drew. “Hopefully I can talk him into taking away a couple of wheels from underneath him in later years.”